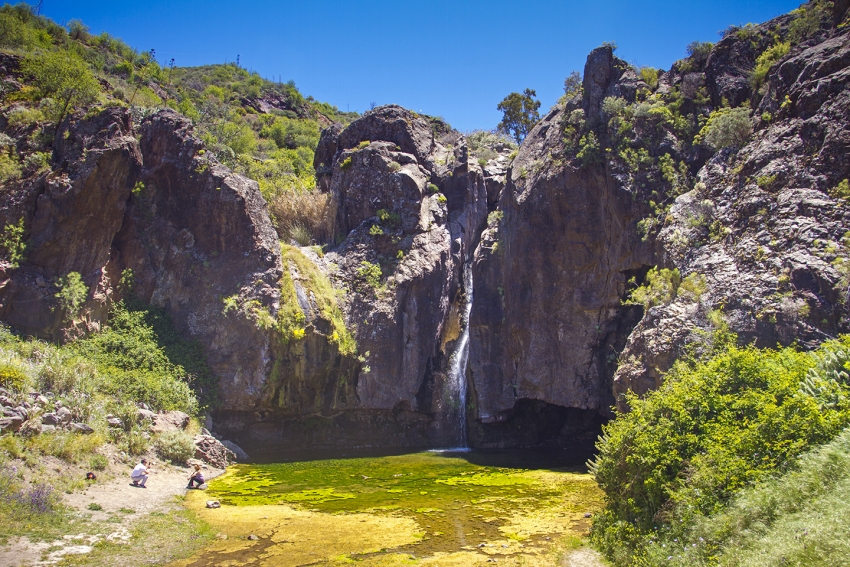 The pool and waterfall at Charco de Las Palomas www.photosgrancanaria.com

When we found a waterfall just a few minutes from popular Tejeda village, we had to put on our flip flops and go check it out.  Here's what we found...

The photographer who first showed us an image of Charco de las Palomas wouldn't tell us where it was taken. So we found it anyway (sorry Pablo) by asking local friends and checking Google.

It was a surprise to find it just a few minutes walk from Tejeda village and one of Gran Canaria's busiest mountain roads. And to realise that we've walked past it several times during the summer; Pigeon Pool isn't unknown because it's remote, but because it only appears after rain.

It's what we love about Gran Canaria; It changes all the time and there's always something new to visit.

Pigeon pool is about five minutes walk from the GC 60 road between Tejeda and San Bartolomé (Tunte). You can't miss the trail; it starts by the giant basket pointing at Roque Bentaiga. The trail starts on the opposite side of the road to the basket and follows the course of the Barranco de Tejeda as it winds uphill.

Either park by the basket and walk into the Barranco de Tejeda or drive up the track until the road ends by a big Canarian willow tree. Then cross the stream and follow the trail. It goes past terraces and little fields before you get to the pool and waterfall.

It looks like someone tried to dam it, but the water escapes under the rock barrier. It's a shame, because if the water was deeper this would be a great swimming spot.

As it is, Pigeon Pool is still a pretty spot and the water is deep enough right under the fall for a relaxing (if chilly) float.

Charco de las Palomas gets its name from the pigeons that roost in the caves behind the waterfall. If you're the first people to arrive in the morning, you'll see them fly away as you arrive.

The pool's pair of grey wagtails are friendlier and hang around catching bichos that you disturb. You'll also hear partridges in the bushes and probably a raven honking overhead. The odd frog croaks away in the stream so it must have some water all year round.

What to do next

The trail to Pigeon Pool is a dead end so head back to the car and either drive on towards Tejeda village, or the other way towards Tunte.

We have 298 guests and no members online