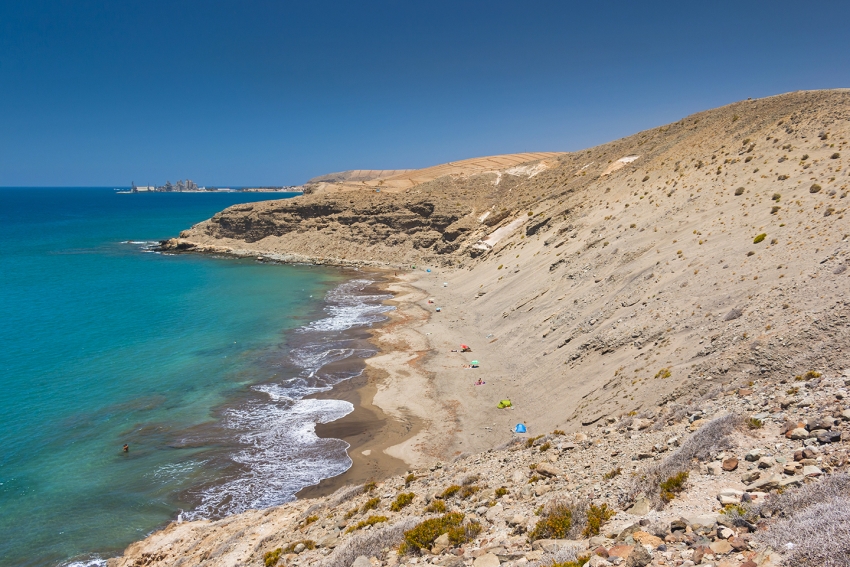 Nudist Montaña de Arena is one of Gran Canaria's legendary wild beaches along with GüiGüi, Guayedra and El Confital. However, it's surprisingly accessible as it's right between the island's main resorts.

South-facing Montaña de Arena beach forms where a giant sand dune hits the sea. Humans here are just guests as the whole dune seems to belong to a family of kestrels which aren't shy about defending it. The occasional flurry of activity as they see off a seagull is the only exciting thing that ever happens here.

The beach, about 250 metres long, has long been south Gran Canaria's hippy, nudist hangout and although it's become better known in the last few years, it's rarely busy during the week.

Lex says: The area between the road and the beach is likely to be developed at some point so enjoy it as it is while you can.

Montaña de Arena beach is a popular spot with local nudists and they don't like foreigners with cameras. You're fine to take a selfie and a photo of the beach, but don't point your camera at other people and don't make videos.

Take care when swimming on Montaña de Arena beach as there are no lifeguards. It's calm with clear water most days but can be rough when the swell comes in from the south.

Montaña de Arena has no facilities so please take your rubbish away with you.

Alex Says: Don't turn off the road when you see a sign for Montaña de Arena that points inland. That's the hill, rather than the beach.