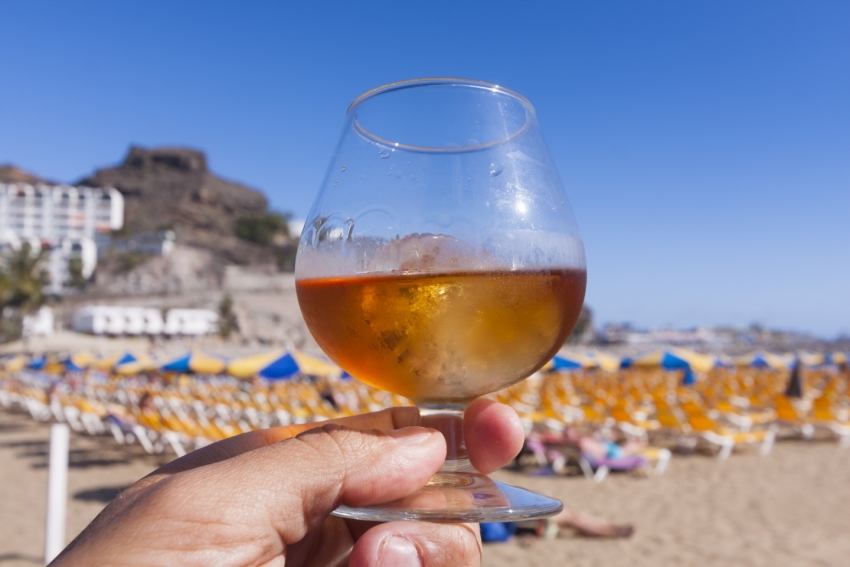 Ron miel by the beach in Gran Canaria

So you're in Gran Canaria and wondering what to drink. If it seems a shame to fly to a volcano and stick to British lager and Spanish wine, then read on and take your pick of the best local booze.

Ron miel is the most popular Canarian drink among visitors and most leave Gran Canaria with a bottle in their suitcase. However, we're going to let you in on a little secret about ron miel liqueur:  Most Canarians only drink it when they've got a cold.

We're not sure how it went from home remedy to resort staple, but every restaurant that caters to tourists now serves shots of ron miel after the meal. Some even leave the bottle on the table or jazz up the shots with whipped cream and a dusting of cinnamon.

All ron miel is sweet and tastes of rum and honey. However the good stuff, sold at the expensive end of the shelf because it's made with top quality rum, has floral, wood and citrus hints. Ron miel is best when drunk ice cold with a squeeze of lemon or lime juice (or at least a lemon slice). Use it instead of rum in a mojito (double shot of honey rum and cut back on the sugar) or add a shot to a piña colada for a hint of honey.

Ron miel has special geographical status within the EU so nobody else can use the name and it has to be made with local rum and honey. Production is an incredible 1.5 million litres per year (about four shots per tourist per year).

Gran Canaria was a global wine exporter back in Shakespeare's day, but its wine industry was in the doldrums until the last few years. Modern techniques, combined with the island's ancient grape varieties (the Canary Islands are one of the few places in the world free of Phylloxera disease), have brought it back to life.

Modern Gran Canaria wines, and especially the whites, are excellent and we taste as many as possible. For more on Gran Canaria and Canary Islands wines and reviews of the best ones we've tried, visit the wine section.

Gran Canaria's own brand of beer is made in Las Palmas and the locals are very proud of it. Its rival from Tenerife is called Dorada and you can buy both in most bars outside the tourist resorts. Which is better? Well, this is a website about Gran Canaria so we're going to say Tropical. Try them both and make up your mind.

Tropical was traditionally sold in a little, label-less 200 ml bottles called a botellin (pronounced boteyin). The idea was that you drank the beer before it warmed up and then ordered another. Botellines are still sold in many local bars but nowadays most places sell standard beer bottles of Tropical or have it on tap.

Tropical also do a 2% lemon shandy, sold in a green bottle. It's pretty good on a hot day if you can't face a(nother) beer.

Rum is part of Gran Canaria's spirit and has been distilled here for over 500 years. Some say that it was invented either in the Canary Islands or Madeira (where sugar cane was farmed long before it got to the Caribbean). Origins aside, Gran Canaria's rum is strong, tasty and doesn't give you hangovers (much).

Mention rum in Gran Canaria and you get Arehucas. It's the island's biggest brand and is made in the rum factory in Arucas town. This is well worth a visit as you get to see the bottling plant and also experience the barrel room where thousands of barrels or rum, many autographed by famous visitors, slowly mature into amber nectar. The musty, rich smell is spectacular.

Arehucas rum is made the Spanish Caribbean way with alcohol made from the molasses left over after making white sugar. Other Canarian rums, such as Ron La Aldea (once made in Gran Canaria but now in La Palma where there's more sugar cane) use alcohol made from pressed cane juice. This is similar to French Caribbean and Brazilian rums.

White rum is unaged and pure with no hangover-inducing tannins but also less flavour. It's used to make cocktails and as a mixer. Golden rum is aged for about three years in oak barrels and absorbs flavour and colour from the wood. It can be drunk alone or in cocktails and goes well with cola. Aged rum (ron añejo) spends between five and 30 years in the barrel and develops a rich flavour and dark colour. It's drunk alone with ice just like you'd drink a good whisky.

A Santa Lucia speciality, Mejunje is a liqueur made from honey rum souped up with a secret blend of aromatics that includes lemongrass, lemon verbena, cinnamon, lemon peel and coffee beans. Unsurprisingly it's lemony with a hint of coffee.

Ron miel made the jump from traditional drink to tourist favourite, but banana liqueur hasn't left the shelf since the 1970s. It's still in every souvenir shop, but nobody seems to buy it or drink it, at least in the Canary Islands.

Lurid yellow and with a strong taste of artificial banana, its main attraction is the retro bottle shaped like a bunch of bananas.

We have 418 guests and no members online