The Top 10 Beaches In The Canary Islands 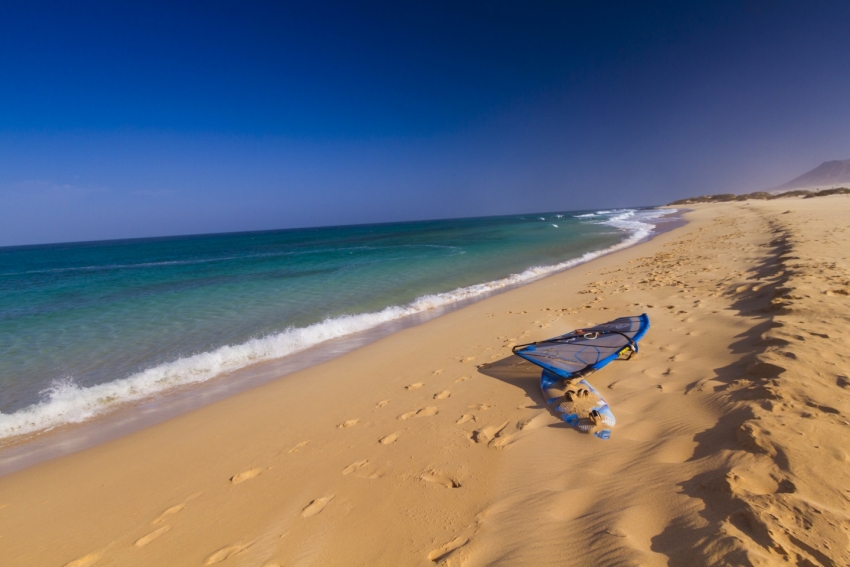 One of the 500 beaches in the Canary Islands

As Canary Islands photographers we've visited most of the 500 beaches in the archipelago. It's tough to narrow them down to a Top Ten so we cheated a bit, but here's our pick of the best places in the Canaries to spend a day on the sand. 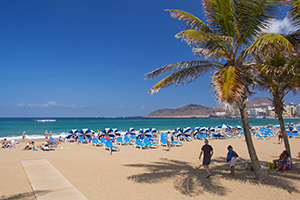 Las Canteras should be on all of the 'Top Ten City Beaches in the World List' along with Copacabana, Waikiki, Bondi, Barcelonetta and Miami beach. It's 3.5 kilometres long and while the city is right behind the sand, Las Canteras is big enough to feel natural.

This is a beach with everything; surf waves at the south end and wide swathes of palm-fringed sand behind the barrier reef at the north end, great food on the beachfront, excellent snorkelling (it's in a nature reserve). Best of all, it's in Las Palmas; the city with the most pleasant climate in the world.

You can't miss Las Canteras beach as it runs the length of the city's north-west fringe.

Half way between a mini desert and a beach, Maspalomas and Playa del Inglés beaches (they join up in the middle) are a vast natural expanse of sand dunes and beach in the far south of Gran Canaria. With over 6.5 kilometres of shore and miles of dunes, this is a beach area of epic proportions.

Families cluster at the ends while the centre is the world's busiest nudist beach. Maspalomas beach is easy to get to from Playa del Inglés and Maspalomas resorts in south Gran Canaria. 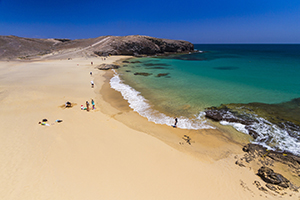 The string of white sand beaches at Papagayo in south Lanzarote are up there with the best in Europe. They range from tiny patches of sand just big enough for a towel to long sweeps of sand with turquoise water. Some are nudist and all are within the Ajache protected area. The most famous beach, called Papagayo, has a restaurant but the rest are pristine so you need to take water to enjoy a full day exploring the area.

The Papagayo beaches are a long walk or a short drive from Playa Blanca resort. The small entrance fee to the park is well worth it.

Lex says: If you want more info about Lanzarote and it's beaches, head over to the excellent Lanzarote Info website. 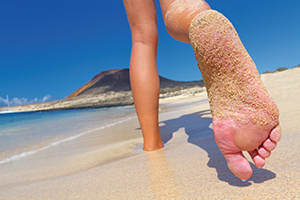 An idyllic white sand beach with tiny volcanic islets on the horizon and it's own pirate teasure legend, Las Conchas looks and feels like a Caribbean beach on a desert island but it's actually on La Graciosa islet just north of Lanzarote.

La Graciosa is a boat trip from Orzola in north Lanzarote, then a bike ride or 4WD trip from the islet's only town but the journey is so worthwhile. If there's a beach in Europe that you have to travel too, then this is it. 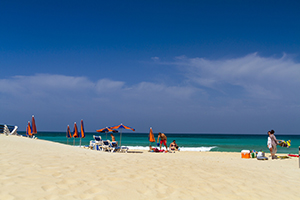 Fuerteventura's Big beaches stretch for kilometres along the northeast coast just south of Corralejo town. With turquoise waters, white sand and the Corralejo dunes behind, this is one of the most impressive sets of beaches anywhere in Europe. Best of all, they get almost constant sun and are so long that you never feel crowded.

Go to playas Grandes for the ultimate beach experience and for all the kitesurfing, windsurfing and messing about in waves that you can handle. Walk to Playas Grandes by following the coast south from Corralejo, or drive through the Dunas natural park until you see a beach that is perfect for you. 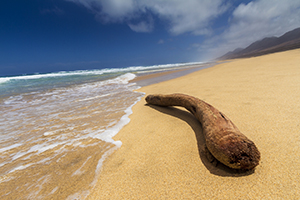 The wildest paradise beach in the Canary Islands, Cofete in south west Fuerteventura is over 10 kilometres of golden sand with no development and nothing but the boom of the surf and the swoosh of the sand.

As befits its wild nature, swimming at Cofete can be risky due to the constant breakers but you can swim safely if you hike five kilometres along the sand to the El Islote rock. Linked to the beach by a sand spit, this giant monolith hosts a sheltered patch of water so clear it feels like you are swimming in the air.

Cofete beach is a 17-kilometre drive down a good quality track from Morro Jable town in south-east Fuerteventura. Park where the road ends at the village cemetery and the beach is yours. 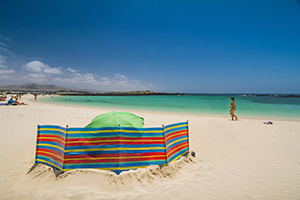 Fuerteventura is beach island and El Cotillo beach in the north west corner is most people idea of a perfect spot; a half moon of white sand with calm, clear water with one fantastic beach restaurant serving local seafood and delicious snacks.

There's more to El Cotillo than one sandy beach. Walk south from the bay and you get the classic black lava and white sand combination at the Los Lagos beach just to the south. At low tide you can bask in clear pools warmed by the black rocks. 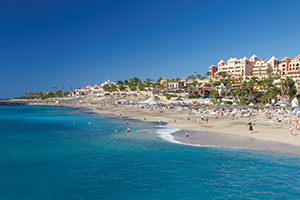 With its pale sand and thatched parasol, El Duque is the prettiest of the string of beaches that fringe south Tenerife's famous resorts. It's also the areas most upmarket beach thanks to the smart hotels just behind the sand.

We love the smooth rocks at the east end of the beach because they look more like Thailand than the Canary islands. 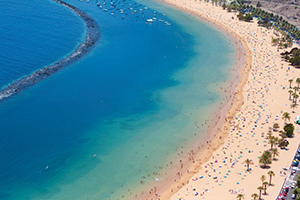 With palm trees on the sand, local restaurants close by and a fantastic beach vibe, this is one of the top artificial beaches in the Canary Islands.

If you've spent the day exploring the natural wonders of north Tenerife and just feel like spending a few hours on a gorgeous beach, this is your spot.

Alex Says: Hat tip to the guys from My Destination Tenerife for being so helpful when we last went to Tenerife to take photos. A great website for everything you need to know about Tenerife and its beaches. 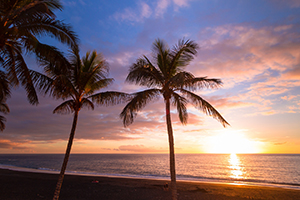 The western Canary Islands aren't famous for their beaches, but Puerto Naos has the sand and the charm to make the list.

With dark, volcanic sand fringed with coconut palms and a cute beachfront promenade, this beach resort in western La Palma is a real alternative to the busy resorts on the main island.

Puerto Naos has laid back charm and the beach makes you feel like you're in the wild Caribbean (the miles of banana plantations helps). The sunsets here are to die for.

Eat in the local restaurants at the north end of the beach. If you're lucky, you'll see the sperm whales swimming past while you tuck into your fresh fish. 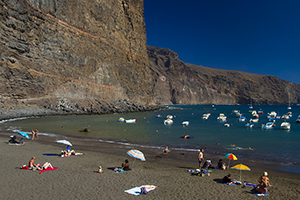 Ok, we said ten, but we had to include Las Vueltas beach at Valle Gran Rey in La Gomera. With black sand and epic views of the huge sea cliffs along in south-west La Gomera, this little beach, sheltered by Valle Gran Rey harbour, is probably the most charming patch of sand in the eastern Canary Islands.

Just south of town you have Playa del Inglés (the La Gomera version). A spectacular nudist beach with a genuine hippy vibe. Take care in the waves as they are powerful.

Alex says: In Valle Gran Rey, you have to go whale-watching with Oceano. They take you out in a traditional fishing boat and really know their local cetaceans. 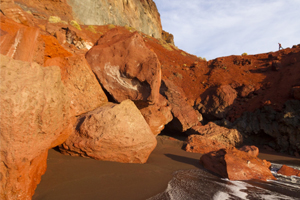 Little El Hierro island out in the far west of the Canary islands is more famous for its natural swimming pools and lava arches than for its beaches. However, the last time we were there we photographed this spectacular little beach at Tacorón in the south-west. It's tiny but the sand is bright red.

Time your visit with low tide and sunset and you get the most spectacular sunset experience anywhere in the Canary islands. Tacorón beach is just north of the natural pools (and bar). Look for the red track and walk to the edge for the scramble down to the red sand.

We have 366 guests and no members online