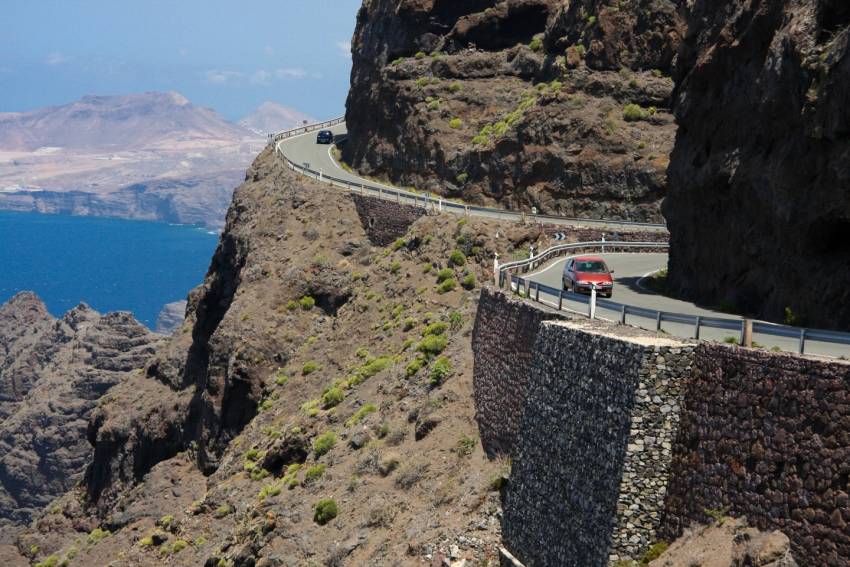 CLOSED: The GC 200 west coast road between La Aldea and El Risco closed for good in 2016. The new inland road, now part of the GC 2 is now open.  From El Risco until Agaete you can still enjoy the stunning sights from the GC 200.

The West Coast road is Gran Canaria's most dangerous and ridiculous road. It's also one of Europe's top drives with cliff edge moments that have vertigo sufferers clambering out of the windows. It's not for the faint-hearted and if the government has it's way it'll be permanently closed within a few years.

If you like your motoring, it's worth renting a good car for the day just to experience the curves and switchbacks before the route drops into the ocean.

Driving from the south, head inland from Puerto de Mogán and take the turnoff towards Veneguera beach. Then just drive, perhaps with a stop at the green and purple rock stain for a smoothie at the roadside juice bar. Carry on through the Degollada de Tasartico gorge until you get to La Aldea town on the west coast. Drive through the town until you get to the pebble beach ( a great spot for a snack) before heading uphill again towards the Anden Verde cliffs (follow the signs for Agaete and Las Palmas).

Stop at the El Balcón lookout point for a cliff-edge view of the Dragon's tail to the south and the cliffs stretching north to Puerto de las Nieves. Then it's onwards to the highest stretch of road. If you're in any doubt as to the dangers of this road, then the huge rock-catching nets will convince you.

There's nothing along the road except for eye-popping drops and hairpin bends until you reach El Risco village. Stop at the ramshackle bar / shop in El Risco (try the mature cheese: It's as strong as it gets) or walk inland through the village and up the valley to Charco Azul pool and waterfall. You'll wind up every dog in the village but don't worry, they are harmless.

From El Risco carries on to Agaete town with its white houses and faint smell of mangos and coffee. Congratulations; you've done the West Coast road. Now you either turn around and drive it again on the outside of the road, or carry on to Las Palmas and back to the resorts via the motorway.

Warning: This road is often closed during and after rains due to fallen rocks. Do not attempt to drive it during rain! In 2010 a Guardia Civil policeman was killed after a storm while checking to see if it was clear. As of January 2015 bicycles, mopeds and motorbikes are banned on the road.

The road won't be around forever. Plans are afoot for a faster inland route and eventually, the original road will be allowed to drop into the sea. Apparently, its potential as a tourist route isn't high enough to justify the costs of clearing after the rains.

We have 2291 guests and no members online