The Top 10 Most Spectacular Viewpoints In Gran Canaria 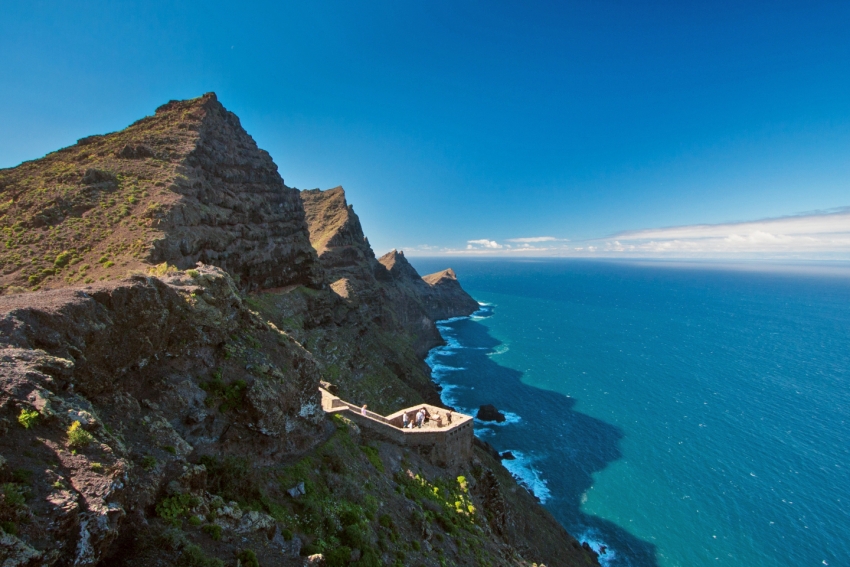 Two things Gran Canaria isn't short of are spectacular views and people who put viewpoints in front of them. Here's our pick of the best ten places to take in a landscape in Gran Canaria.

An improbable balcony that hangs out over the edge of the lava cliffs at Anden Verde in west Gran Canaria; the Mirador del Balcón viewpoint is a highlight of the island's most spectacular road.

Stop when you see the little car park with the snack van (the owner can be a grumpy so-and-so) and the ravens. The view from the car park wall is spectacular but for the full effect walk down the steps to the viewpoint. The jagged cliffs to the south are called the Dragon's Tail while north is one of the highest sea cliffs in the world. In the far distance, you see Puerto de las Nieves and Sardina del Norte, both great spots for lunch.

These vast cliffs formed when a big chunk of the island dropped into the sea at an unknown time in the past. They are home to many of the island's rarest plants and animals (there are only ten pairs of ravens left in Gran Canaria).

The traditional crossroads between north and south Gran Canaria, Cruz de Tejeda gives you views of Teide, Roque Nublo and Roque Bentaiga through the chestnut trees. It's the first place you can see Teide if you drive up from Las Palmas and it's also where the northern clouds give way to southern blue.

There's no official viewpoint so walk up and down the road to find a good spot, or sneak into the Parador Hotel and use their terrace. For a similar view of central Gran Canaria and the Tejeda caldera, stop at the Mirador de la Degollada de las Palomas on the GC 150 road that links Cruz de Tejeda with the GC 21 road. From here you also see one of Gran Canaria's most spectacular volcanic landscapes at Montañon Negro: A former gravel quarry that is now a bare, volcanic hillside studded with palm trees.

Gran Canaria highest village has fantastic views south into the Caldera de Tejeda and towards the Roques. Just walk past the church to the edge for a first glimpse, then follow the signs to the La Cilla cave restaurant. Once you get through the stone tunnel you see the whole Caldera from within a cave right on the cliff edge. Other alternatives are to walk up to the giant Christ sculpture, or up through the village for a view of the village and church with the Caldera in the background.

An alternative is the view from anywhere in Tejeda Village.

The high point of Gran Canaria with a vast view of the centre and southern valleys. This is a great spot at sunset and just after sunrise (the sun takes a while to get over the hump of the island) but worth visiting at any time.

Alex says: Look out for the flocks of Canaries at Pico de las Nieves. Thjey are most at home in exposed areas with plenty of seeds to eat.

The newly remodelled viewpoint at the end of Avenida Tirajana in Playa del Inglés overlooks the most Saharan part of the Maspalomas dunes. It's a series of steps perfect for sitting and watching the sunset (all it needs is a bar).

Get similar view all along the pedestrian path that runs from the Mirador east towards San Agustín, or walk into the dunes for a more natural experience.

Just past the Mundo Aborigén theme park on the GC 60 road between Playa del Inglés and Fataga, this viewpoint gives you an idea of the scale of the Fataga Valley and the southern highlands of Gran Canaria. It's at its most spectacular in spring when the whole area turns green but is worth a stop all year round.

Las Palmas is a long, thin city and this viewpoint,high above the Garden City, gives you the best panoramic view of the whole place from the Old Town at Vegueta, the port, and all the way north to the isthmus and La Isleta. The only part you can't see is Las Canteras beach but you want to be on that rather than looking at it.

Cuatro Cañones is on the red city bus tour route. Otherwise, ask a taxi to take you up. A return trip to anywhere in the city, plus wait, shouldn't cost more than 10 euros.

From a bird's-eye view of Arucas 'cathedral' to a panoramic sweep of north Gran Canaria's banana plantations, Arucas volcano is the place to go for an overview of the area. Drive right up to the viewpoint at the tip and take in the surprising greenery. Then have a snack at the newly reopened restaurant.

Lex says: You get similar views from the tip of Galdar volcano; also accessible by car.

Everybody heads to the tip of the cinder cone for views of the Bandama Caldera but actually, the best views are from the mirador a little way into the caldera itself. The walk starts at the beginning of the spiral road up the cinder cone (by the houses). Walk a couple of hundred metres down into the caldera and you get to a mirador with a view of the whole of the inside. Then you can carry on down to the bottom (don't approach the grumpy donkey), or head back up and walk around the rim.

The top of the cinder cone is worth a visit too, especially now that the little house at the top is open to the public. It's a combination of information point and secret hideaway (Franco's wartime bunker under the hut is now open to the public: It was so secret that nobody knew about it until refurbishment started).

The cliff-edge church square in Moya looks out over Gran Canaria's steepest and greenest gorge. If you have any problem with heights the drop with flip your stomach, even though the barriers are solid. Down below are  some of the island's rarest plants clinging on to their existence in the last patches of laurel forest.

If you're counting then this is number eleven but we just had top put it in. The viewpoint at the top of the hillside village in Puerto de Mogán gives you a superb overview of the marina, village and beach. Plus, you get to wander through the maze of houses that was the original village. You'll get lost but don't worry; the locals will point you in the right direction.

We have 3505 guests and no members online