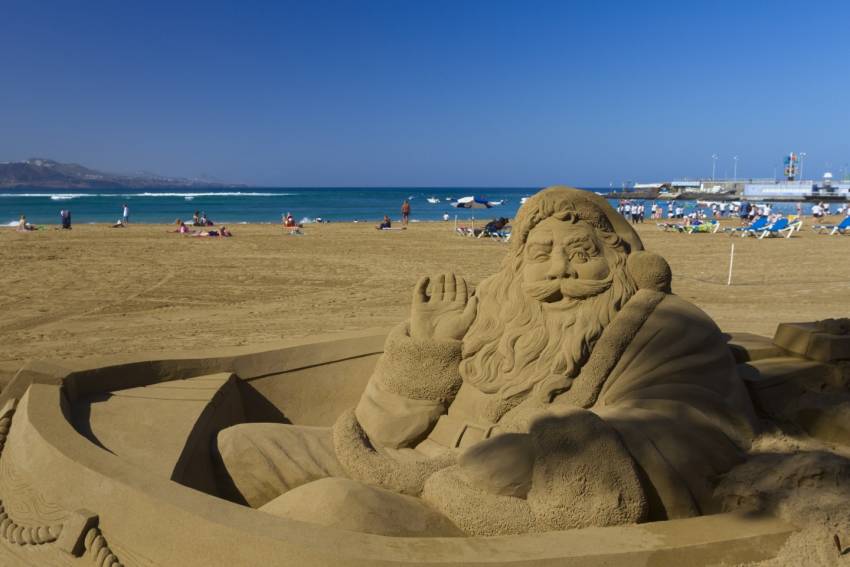 December is often a sunny month in Gran Canaria although we do get a few days of rain almost every year.

While Europe is battered by cold, wet weather in December, the Azores anticyclone tends to sit to the north of the Canary Islands and prevents the bad weather from reaching the Canaries.

During December 2015, one of the warmest and sunniest on record, two anticyclones blocked out the bad weather and the sky was blue and sunny almost every day. The only break in the sunshine was a few days of calima dust that blew over from North Africa. However, while winter calimas make the sky white, they don't bring the extreme temperatures of summer dust events.

There is something strange about spending Christmas in the sunshine. The brain expects cold and snow, but you have to head up the very top of Gran Canaria for a chance of traditional Christmas weather in Gran Canaria.

The average temperature during the day during December is 22ºC and the average low is 16ºC. However, most days the mercury rises over 25ºC at sea level and it’s warm enough on sunny days to spend hours on the beach or by the pool. You’ll need a jumper or a light fleece at night if you plan to eat outdoors, but the standard December uniform is still shorts and a t-shirt.

It rains for an average of four days per month in Gran Canaria during December. If you come for a week you will get sunny days unless you are very unlucky and coincide with a big storm. Even during the odd bad week, it is still warmer in Gran Canaria and the Canary Islands in December than anywhere else in Europe.

If you want to get away from the cold during December then come to Gran Canaria. Eat a mince pie on the beach and send your photos back home and you’ll hear the groans from across the ocean.

We have 2433 guests and no members online