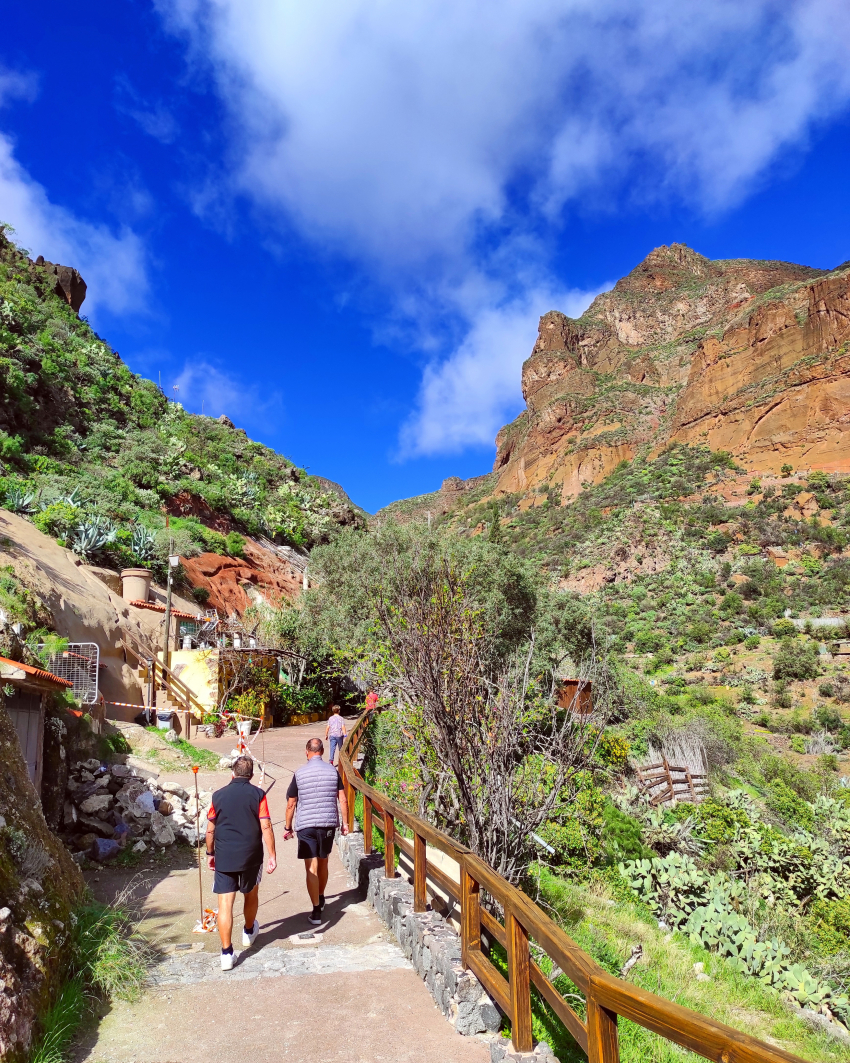 It's going to be a stunning year for walking (or driving) in Gran Canaria because this second rainy spell will extend the green into April and May. The rain this week was what local farmers call "lluvia mansa" or tame rain; gentle rain over a long period that really soaks into the soil rather than crashing down and running off into the sea.

We went to Guayadeque this weekend in search pf the first flowers of spring because it's low down and always one the first areas to explode into colour. However, it turns out we timed our visit wrong. We arrived after the almond blossom and a couple of weeks of sunshine before the wildflowers. The valley is all bright green but apart from the purple lavendar and white echiums, there were just a few almonds tucked into shady corners still covered in flowers.

We'll be back once it is full bloom and full of bees to get some photos for anyone who cant make it there this year.

On this visit we drove all the way up the road to the cave restaurants at the top (the museum at the bottom of the valley is currently closed). There's an easy loop walk around the back of the famous Tagoror cave restaurant. It's only 500 metres but you get great views down the valley and it even has a cave gift shop full of local arts and crafts and Guayadeque honey.

Then we did a few kilometres of the trail that runs from the cave restaurants up towards the Caldera de Los Marteles or towards Cazadores. It's a wide path but quite steep at the beginning and you get more views of the whole valley stretching out towards the sea.

The restaurants and bars in Guayadeque, including the famous Tagoror cave restaurant, are open but with outdoor tables only so they fills up fast at the weekends.

The Guayadeque Ravine was one Gran Canaria's aboriginal strongholds. It's rugged walls and many caves allowed them to thrive here out of reach of European and North African pirates and slave raiders. They even used moveable ladders to make their cave villages impregable. It's all explained in the museum at the bottom of the ravine but it is currently closed due to structural problems (the roof cracked).

The tradition of cave living continues today although the population of Guayadeque is dropping as the last few farmers and shepherds retire. There used to be farms in the valley that were completely troglodyte with cattle, sheep and goats, chickens and rabbits all in their own caves. Until the early 1990s part of the valley still had a stream overgrown with vast taro plants or ñames. The farmer who owned the rights to the water refused to let it be piped until he died.

Maybe he was old enough to remember a famous tradition that only seems to have happened at Guayadeque; the dance of the leaves. In the old days, young men and women would gather around a fire once the priest had gone to sleep and dance naked for each other using ñame leaves to preserve their modesty. 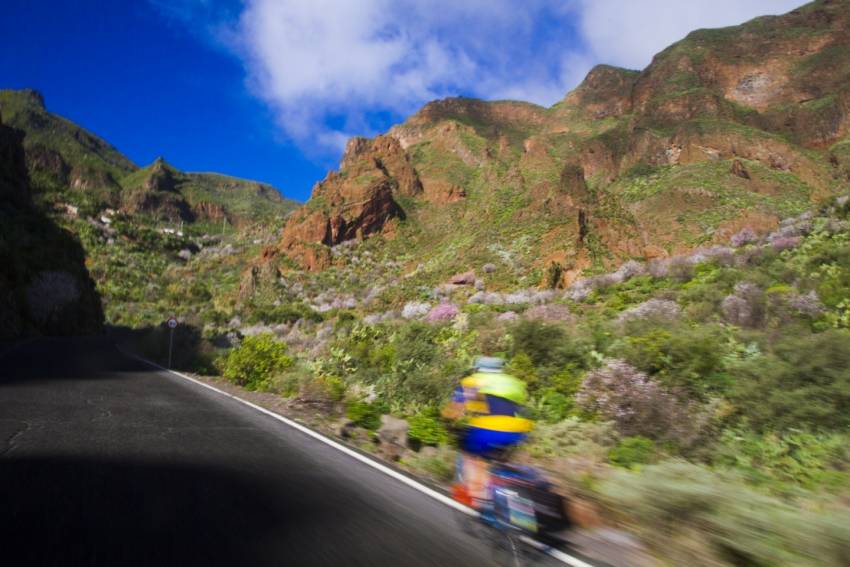 The Guayadeque gorge is easily the most interesting day trip in East Gran Canaria, especially combined with Aguimes old town and an afternoon swim at Arinaga. It's also a pain in the neck for visitors.

You'll get one from looking up at the high cliff walls and cave houses, then from ducking into the cave houses and chapel. Even the restaurant at the end of the road is carved into the rock.

Sound carries in the gorge and you'll hear dogs barking from their cave kennels and the shrill cry of kestrels as they harry the buzzards overhead. And then you'll notice the hum.

From their hives clustered high up on the valley sides Guayadeque's bees feast on a rolling buffet of flowers. The first course is a feast of pink and white almond blossom in January, followed by yellow broom, purple lavendar and blue bugloss flowers. There's always something in flower here: Guayadeque is one of the most biodiverse spots in Europe, home to dozens of unique Canarian plants.

Try the honey in the cave shops by the chapel half way up the valley.

Guayadeque was a stronghold for the island's original inhabitants. They were the valley's first troglodytes and their traces are everywhere. Visit the interpretation centre at the beginning of the valley road for details on their lives here and the traces they left behind.

Modern day locals still live in cave houses in the valley, although many have turned them into rural houses for visitors. In the old days it wasn't just the people that lived in cavesbut entire farms with everything from cows to rabbits dwelling inside the rocks.

Alex Says: Guayadeque is vertigo-sufferers gateway to the landscapes of central Gran Canaria. You get the monumental cliffs and rocks of the cumbres without steep drop offs.

We have 2704 guests and no members online