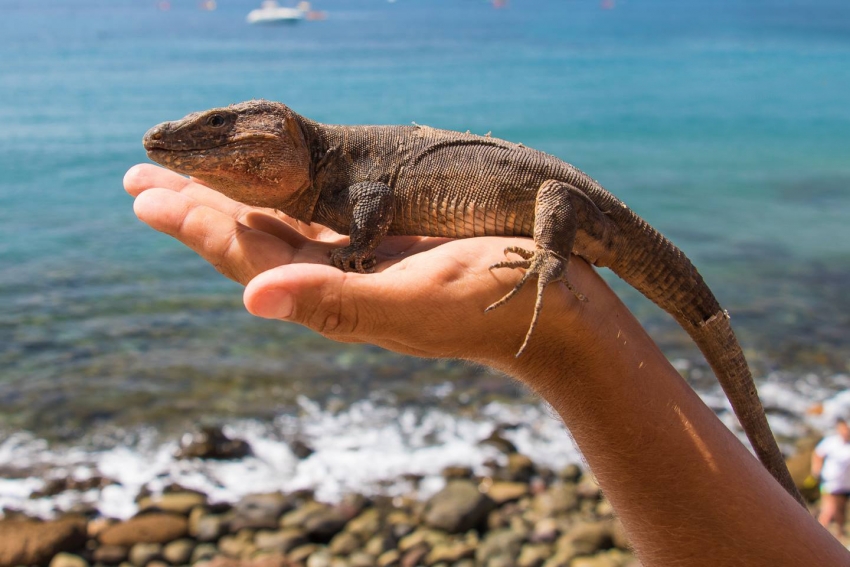 Giant Gran Canaria lizards (Gallotia simonyi stehlini) only live in Gran Canaria but are common all over the island. However, you really should leave them in peace.

It's hard to walk anywhere in Gran Canaria without seeing, or at least hearing Gran Canaria's lizards. They grow up to 80 centimetres (but used to be much bigger before man arrived) and have grey skin with a pale belly. They are the largest true lizards in the world.

The larger males have big jaw muscles and a much more colourful chin and throat. Babies, about 20 cm long, have brown bodies with longitudinal stripes, a few spots and a pale throat and belly. As they grow up the lines fade but the spots stay until they get to about 35 cm.

Giant Gran Canaria lizards will eat pretty much anything from insects to carrion. Chuck a slice of tomato or banana at a lizard in Gran Canaria and there is a good chance it'll run over and eat it.

Anyway, enough of the details; here's why you shouldn't touch them (unless you have to fish one out of the swimming pool).

They are a protected species 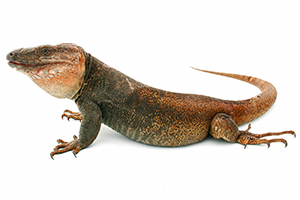 The main reason not to touch giant Gran Canaria lizards is that they are heavily protected by law. It is illegal to kill or harm them, and even to catch them.

This is because giant lizards on the other Canary Islands are either highly endangered or extinct.    There are only a few hundred of the Tenerife species left, a few hundred El Hierro giant lizards, and just 90 of the La Gomera giant lizards. The La Palma giant lizard was thought to be extinct but a recent sighting suggests that a few survive.

Giant lizards used to be common on all five of these islands but have been hunted by introduced cats, rats and hedgehogs for centuries.

Luckily, the Gran Canaria species is much feistier and breeds at a smaller size than the others so it is still common. However, it is now threatened because some idiot released California king snakes a few years back and they are spreading fast and eat a lot of lizards.

They are aggressive with a strong bite

If you do find one in your apartment or on your patio use a brush to push it into a bucket. Don’t try and grab it unless you are sure that you are faster than the lizard (you're not).

They Drop Their Tails

If you are foolhardy enough to grab a giant Gran Canaria lizard,  there's a good chance it will drop its tail out of shock. The severed and bloody tail then thrashes about on the floor and makes a mess. The idea is that predators get distracted by the wriggling tail and the rest of the lizard escapes.

Lizards that drop their tail eventually grow a new one but it takes a lot of time and energy and is never as pretty as the original.

They were here first

Giant Gran Canaria lizards were on the island long before the tourist resorts and motorways. In fact, they were here for millions of years before people even knew the island existed. The lizards are are the original Canarians and deserve to able to roam as they please. Feel free to throw a tomato their way, but please make every effort not to harm or disturb them.

We have 2206 guests and no members online