Seashells and Surfers at La Laja Beach in Las Palmas 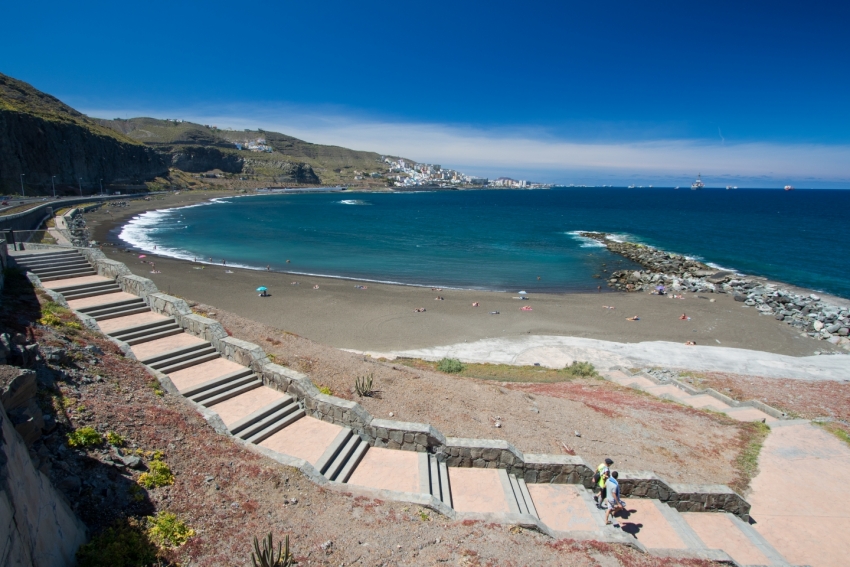 Drive into Las Palmas along the coast road from the airport and you can't miss La Laja beach and its mob of seagulls. While everybody sees it, only boogie boarders and locals appreciate it.

La Laja is a 1200 metre, east-facing, black sand beach at the south-eastern fringe of Las Palmas. It's linked to the city by the main coast road, and by the beachfront promenade that runs the length of Las Palmas' east coast.

Lex says: Nudism is allowed if not actively encouraged at La Laja after a local naturist group staged a naked sit on until the city authorities just left them to it.

Head to the north end of La Laja for surfing and the south end for sunbathing and swimming: The calmest part is by the breakwater at the south tip. This is also where you'll find the most seashells; look out for large red clams and smaller orange cockles.

There's parking at the south end (exit just past the huge statue of Triton if you're heading into the city) and at the north end. The viewpoint here, called the Punta del Palo, has a great view north towards Las Palmas.

New natural swimming pools at the north end are great on rough days.

Toilets are at the north end of the beach and La Laja has lifeguards on weekends and during local holiday periods. There are no shops or bars by the beach; the nearest restaurants are in San Cristobal village about a kilometre north.

We have 3748 guests and no members online