The Newbie's Guide To Nudist Beach Etiquette In Gran Canaria 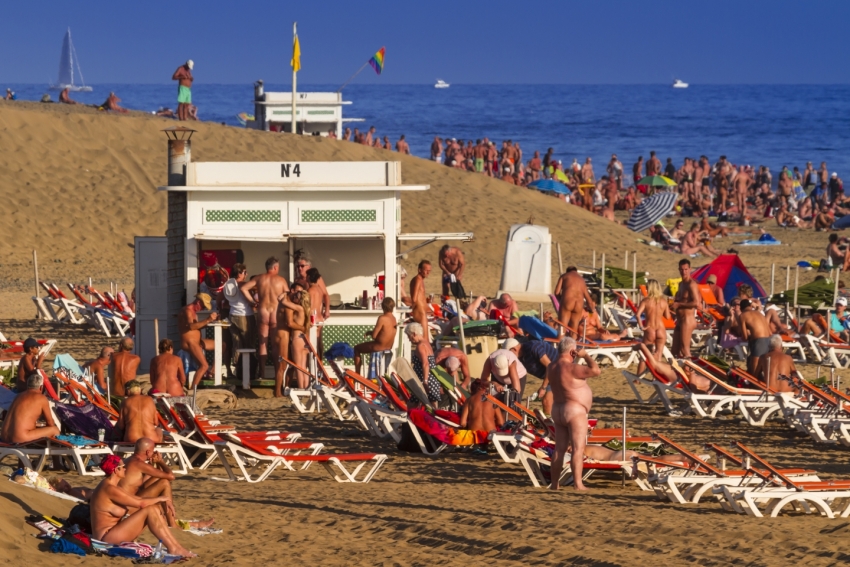 The rules of nudism in Gran Canaria

As one of the world's top nudist friendly destinations, lots of people dare to bare for the first time in Gran Canaria: If you're a naked newbie, here's the local etiquette. Click here for our guide to Gran Canaria's best nudist beaches.

While nudism is legal on every beach in Gran Canaria (and the whole of Spain), it's best to choose a spot that's an accepted nudist hangout (sorry, the puns just keep flopping out). You're fine anywhere in the central part of Playa del Inglés and Maspalomas beach and on remote beaches along the south coast such as Tiritaña and Medio Almud. Montaña de Arena beach is a famous nudist spot, as is Guayedra in the northwest.

Lex says: The rule for remote Gran Canaria beaches is simple: If you're alone on the beach, then clothes are banned.

Do as the locals do

Nudism is popular amongst Canarians so if you're not sure if you're on a nudist beach or not, look for the locals. Often you'll find that one end of a local beach is nudist, even though there are no signs. For example, nudists cluster at the east end of Aguadulce beach and at the far west of El Confital.

Respect other people's space when you pick a spot on a nudist beach. Even though it gets pretty crowded around the kiosks at the Maspalomas nude beach, many people like a decent patch of sand around them. A good rule is, if possible, to leave at least 10 metres between your bare bum and the nearest stranger's bare bum.

Obviously this rule doesn't apply around the nude kiosks on Maspalomas beach: Some days you're lucky to find a patch of sand big enough for a towel.

Careful with the camera

We know that being nude in public is a liberating experience and that you want to have proof to show your friends at home (don't), but be careful where you point the camera. Some nudists like to keep their habit secret and others are sensitive about anyone photographing (and especially filming) children nude. There's rarely problem taking a few photos, but don't focus on others and don't linger too long on the angles. If anyone gets annoyed, put the camera away.

Going indoors? Put something on

Opinion is divided about the need to put on clothes to use the beach kiosks at Maspalomas. Most people don't bother and the staff say that they've seen it all before. However, if you use one of the stools, sit on a towel.

In general at nudist hotel areas the rule is simple: If you need to go anywhere with a roof, then put your clothes on. All of them; it's not cool to wander about in your pants.

Staring into the middle distance is fine but staring at people isn't, even if you are wearing sunglasses. It's never polite to gawp on the beach and especially not on a naked one.  You'll stop noticing that people are naked once the novelty wears off.

For a complete guide to all of Gran Canaria's best nudist beaches, buy our Dare To Bare: Nudist Beach Guide to Gran Canaria

We have 6093 guests and no members online