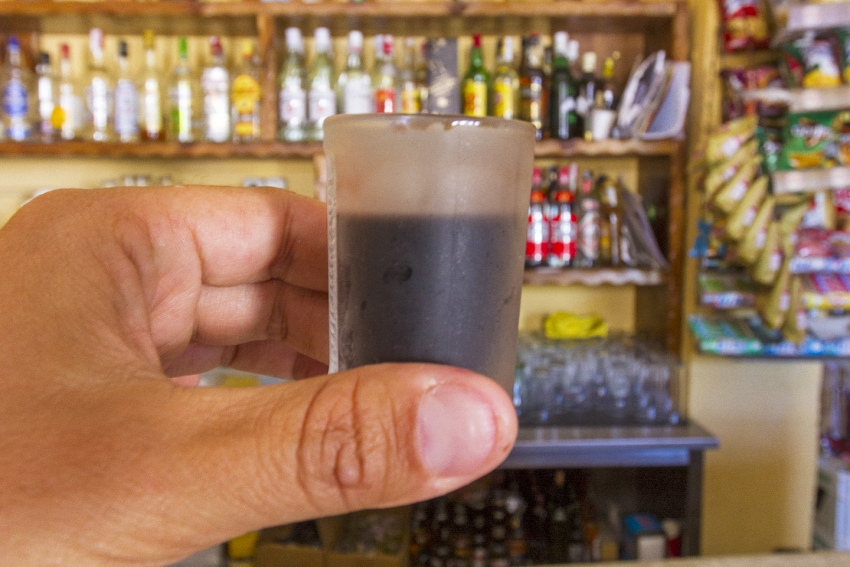 Ron miel is Gran Canaria's most famous liqueur, but it's not the only one. It's not even the tastiest. We recently tracked down the story behind a fantastic local liqueur that's only made in one place in Gran Canaria.

Called guindilla, it's made exclusively in San Bartolomé de Tirajana town (known as Tunte) from guindas; a rare variety of cherry that only grows in old orchards on the steep hillsides.

We're pretty sure guindas are morello cherries because they are smaller than normal cherries and taste sour. They aren't planted in Gran Canaria anymore so the fruit for guindilla comes from ancient trees on old, often abandoned farms.

They are hand-picked in early summer and the pickers have to fight the blackbirds for every kilo.

The name guindilla also gives us a clue about its origins.  Many of the island's original settlers were Portuguese (from Madeira island to the north of the Canaries) and, in Portugal, morello cherry liqueur is calle ginjinha or just ginja. I's made by steeping morello cherries in aguardiente (Portuguese brandy).

Given that Tunte is such an old town we can imagine how Portuguese settlers brought their cherry trees and liqueur tradition with them. Since sugar cane was the biggest crop in Gran Canaria for hundreds of years, the brandy was replaced by rum and ginjinha became guindilla.

Let's take the Portuguese link a step further; over the valley to Santa Lucia town they make a traditional liquer called mejunje. Back in Portugal, there's a similar drink called medronho.

Alex Says: While guinda and madroño liqueur are also made in Spain, it does seem to be Portugal that has the longest tradition of making them.

Shops in Tunte sell little bottles of guindilla for a bout five euros but it's not quite the real stuff. Shop guindilla is a pale pink colour while the real stuff should be dark purple and almost opaque. The best place to try it is in the bar of the Cuatro Esquinas bar in Tunte town centre. It's the oldest bar in the whole municipio and its guindilla is the real thing; strong, black and sweet. It comes in an unlabelled bottle becauase the owner's sone makes it himself and you don't want to drink more than a couple of shot if you're driving.

Guindilla is thick and sweet and has a great, dense flavour of cherry with hints of citrus and a good kick of alcohol.

After picking and cleaning the guindas are steeped in strong rum for several months along with sugar, lemon zest and a few other spices that nobody will tell us about. You know it's ready when the liquid is so dark that you can't shine a light through it.

Use white rum and the same weight of sugar and fruit.

We have 2808 guests and no members online