Where In The World Can You Eat Old Clothes and Wrinkly Popes? 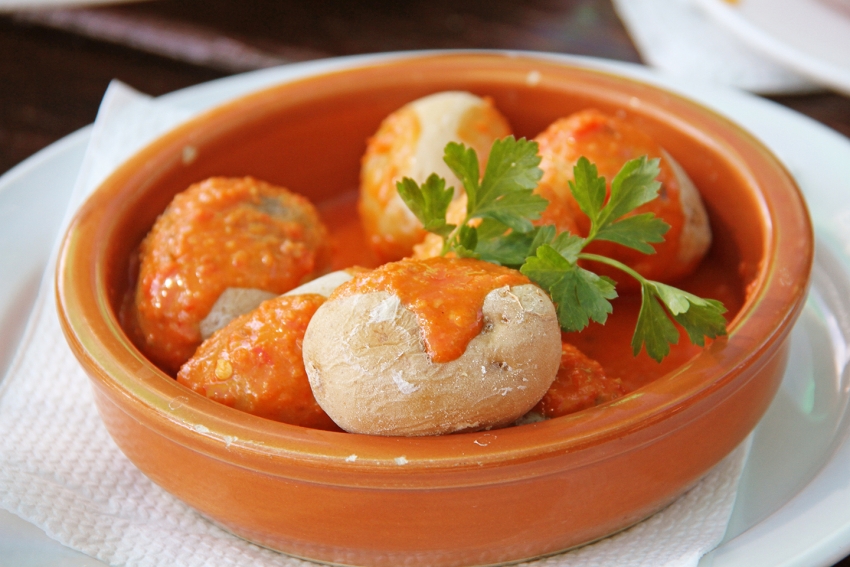 That would be the Canary Islands, where some traditional food dates back to prehistoric times but all of it is bursting with island flavour.

Traditional Canarian food relies on fresh vegetables, fish and meat combined with marinades and sauces. It uses ingredients that were easily stored in the days before refrigeration: Salted fish and goat and rabbit from animals farmed or hunted locally.

Some ingredients, such as gofio (roasted grain flour) date back to pre-Hispanic times and the original troglodyte inhabitants of the islands. Others, such as the tiny black potatoes used to make papas arrugadas, came over from South America. Soups and stews are common and salads are extremely popular. Canarian salads and contain a wide range of ingredients from tuna to papaya. Seafood is popular and the number of ways squid and octopus are cooked has to be seen to be believed.

Here are a few of the most common local dishes to get you started:

The star of Canarian cuisine and the one dish every visitor will come across. The recipe calls for small potatoes and sea water (the water should be salty enough for the potatoes to float). Boil the potatoes until almost dry and then leave them for a few minutes to allow the salt to crystallize on the potato skins. The brine draws water out of the potatoes, making the skin wrinkle up. Traditionally, papas arrugadas come with red mojo sauce, a delicious, spicy sauce made from paprika, cumin, chilli, tomatoes and olive oil. Accepted form is to crush the potatoes in the sauce and then eat them directly from the dish.In its most authentic form, this dish is made with 'papas negras' or black potatoes, a very ancient variety of potato now grown almost exclusively on Tenerife. Papas negras are lumpy little things with a dark skin and dense, yellow flesh. New potatoes or any small ones will do at a pinch. Local menus sometimes list this dish in English as “wrinkly popes”, a mistranslation of the work “papas” which can mean potato or pontiff.

Ropa vieja is a chickpea, potato and chicken or beef stew traditionally made with the remains of meat used to make soup. It is thick and wholesome and flavoured with bay or laurel leaves, paprika and thyme. The dish was carried across the Atlantic by Canarian emigrants and exists in various forms from Cuba and Miami to South America. It is also part of the national dish of Venezuela. In the Canary Islands it is found in most local eateries and many tourist establishments, although no two places use the same recipe. Legend states that it was invented by a hungry man who was so poor he had to cook his clothes, which then miraculously turned into a delicious stew. It is sometimes found translated literally on idiosyncratic local menus as “old clothes”.

There are two basic forms of mojo sauce in the Canary Islands; the mojo rojo described above and mojo verde, made from olive oil, wine vinegar, garlic and lots of fresh coriander (cilantro). Mojo verde is traditionally served with boiled potatoes and with fish, while mojo rojo comes with papas arrugadas. No two recipes are the same and some are closely guarded secrets. All forms make your breath smell of garlic. For days!

Sancocho is another Canarian dish that has been exported to the New World and now exists in various forms all over Latin America and the Caribbean. The original Canarian form consists of a stew made from salted hake or grouper, served with cooked sweet potato and pella de gofio ( a thick paste made from roasted maize flower, served in chunks). The trick to sancocho is to reduce the salt levels by soaking the salted fish in water for twenty four hours before cooking it, changing the water regularly! Sancocho is often served in bars and restaurants as a weekend special is definitely worth trying.

Traditionally, goats were the most common farm animal on the Canary Islands and feature heavily in traditional, rural cuisine. Goat meat can have a very strong flavour but nowadays the more delicate goat kids (baifos) are used. Carne de cabra (a simple, slow-cooked goat stew) is a rich and tasty dish well worth tracking down. It comes served with cooked potatoes or papas arrugadas and is most common in rural restaurants. Baifo meat can also come simply roasted.

Pata Asada or slow-cooked roast pork is a staple of most Canarian bars and restaurants. It is served cold and on its own, with just a bit of sea salt sprinkled on top, and is deliciously moist and tender. It is best ordered as one of a selection of dishes for a tapas-style lunch. Pork is also served as cerdo frito (fried pork). Small chunks of pork are marinated in spices and then deep fried; a guilty if fatty treat, great after a long walk.

Most Canarian potajes or soups are thick and warming and can be a meal in their own right. The most popular one is potaje de berros or watercress soup, made from watercress, potatoes and corn on the cob, often with beans, pork and ñame (taro root). Potaje can be made from almost any combination of vegetables and many restaurants prepare a different one every day.

Carajacas are strips of liver marinated for several hours with garlic, parsley, olive oil, cumin, green pepper and paprika and then stewed. They are tasty and great if you like liver, not so great if you don’t.

Nobody spends very long on the Canary Islands without being confronted with gofio in one of its many incarnations. Originally it was the staple diet of the original pre-Hispanic inhabitants of the islands and was made from milled pre-roasted barley. Nowadays it is often made from maize or wheat. The process of roasting the grain before it is turned into flour make gofio much more nutritious than normal flour. It is traditionally used to wean babies on the islands, as well as being part of many local dishes.Gofio can be dissolved in café con leche to make a thick breakfast drink, or mixed with hot water and mint leaves to make gofio escaldado, a thick paste served and eaten with wedges of sweet red onion. An even thicker paste calld pella de gofio taccompanies soups and stews. Gofio in any of its forms is both something of an acquired taste and a national institution. Canarians attribute their strength to lashings of gofio but a lot of visitors and expats can’t stomach its thick, cloying texture.

Rabbits are common on all the Canary Islands (although not indigenous) and are often found in restaurants as conejo en salmorejo. The basic recipe is rabbit marinated in garlic, chili, white wine, oil, vinegar, cumin and paprika and then fried with the marinade. It is spicy and delicious, if a bit bony! If you order rabbit between August and November (during the hunting season) take care not to crack a tooth on lead shot.

The deep waters around the Canary Islands mean that there isn’t a huge range of local shellfish. Lapas (limpets) and burgaos (winkles) are traditionally consumed, along with little black mussels. The giant Fuerteventura limpet is excellent but has been overharvested and is currently protected by law. Sadly there are no edible lobsters, crabs or prawns to be found in coastal waters but these are imported and readily available (although you will pay through the nose for lobster).

As for fish, the range is excellent, with the vieja or parrotfish being the most popular. Traditionally these were line caught using cane rods tipped with a very sensitive ray’s tail and large iron hooks baited with tiny crabs. While this artisanal method of fishing still exists, especially on Fuerteventura and the smaller Western islands, most vieja is now imported from West Africa.

“Pescado de barquilla” (fish from small boats) is common in restaurants, served fried (over fried according to some) as a mixed platter. Tuna is also seasonaly common around the islands and the small and delicious “bonito” variety is still commercially line caught in the spring and autumn. Moray eel is also a typical local ingredient, although quite why still bewilders me, as even when deep fried to within an inch of its existence it still manages to be tough, fatty and bony all at the same time. Personally, I believe Moray Eels are best left alone to bite scuba divers and scare children.

The star of the seafood show in the Canary Islands is the range and depth of squid and octopus recipes. They are served in a bewildering variety of shapes, sizes and ways that are worth documenting in detail; Octopus can be served 'a la Gallega' (in Galician style) cooked and sliced finely and served on a wooden board with sea salt and paprika . Small octopus are boiled whole and then fried and served tender yet crispy with mojo verde. Ropa vieja de pulpo is another delicious local way of cooking octopus.The tiniest squid, known as ‘puntitas de calamar’, are tossed in flour and deep fried until crispy. They are tiny bundles of flavour, crunchy and salty, the popcorn of the seafood world. It is difficult to feel sorry for something this tasty, even if they were lured into nets just hours after hatching. Rejos de calamar is the long tentacles of large squid served fried. These are considered to be sweeter and tastier than the main body of the squid, which is served in rings either as calamares a la Romana (squid rings deep fried in batter), or calamares fritos (squid rings tossed in flour and fried). Calamares compuestas is a stew of thin strips of squid flavoured with paprika, thyme and, plenty of garlic.Calamar seco is something of a Canarian specialty.Whole squids or squid sides are dried out and then either thrown on hot coals for a few seconds until they start to crisp up, or soaked in aguardiente (firewater) and set alight. The result is a chewy and very fishy snack that is found at local fairs and outside football matches. Choco en salsa is a rich stew made from cuttlefish (a stumpy type of squid, common around the islands). Choco is tender when cooked well and very sweet.

A traditional dessert which is essentially a deep fried turnover filled with sweet potato paste flavoured with cinnamon and lemon rind. Truchas are a Christmas treat on the islands. As an alternative to sweet potato, truchas are also filled with “cabello de angel” (angels hair), a form of hard, white marrow which is shredded and candied.

A fantastically rich and sweet sauce made from honey and ground almonds that is delicious as an ingredient in cakes or served over vanilla ice cream. Bienmesabe is often found in tourist shops and makes a good souvenir. Just remember to brush your teeth after trying it!

A form of thick custard made on the islands and flavoured with cinnamon and lemon peel. Listed in some menus as Mole Eggs!Also worth trying are the flan (crème brulee) and mus de chocolate (chocolate mousse) served in many restaurants, but only if they are homemade and not from a packet. Find out by asking; “El mus/flan es casero?”. If it isn’t, mutter and ask for a coffee!Recently, a new dessert called Polvitos Uruguayos has started to appear on restaurant menus. It is a layer of crumbly biscuit topped with whipped cream and dulce de leche and sprinkled with meringue.Delicious and light, polvitos are well worth tracking down. Canarian cuisine is one of the highlights of a holiday in Gran Canaria or any of the Canary Islands. It is worth getting out of the resorts to find authentic local food.

We have 2508 guests and no members online