Holiday Towel Wars: You Won't Believe What People Will Do To Bag A Poolside Lounger 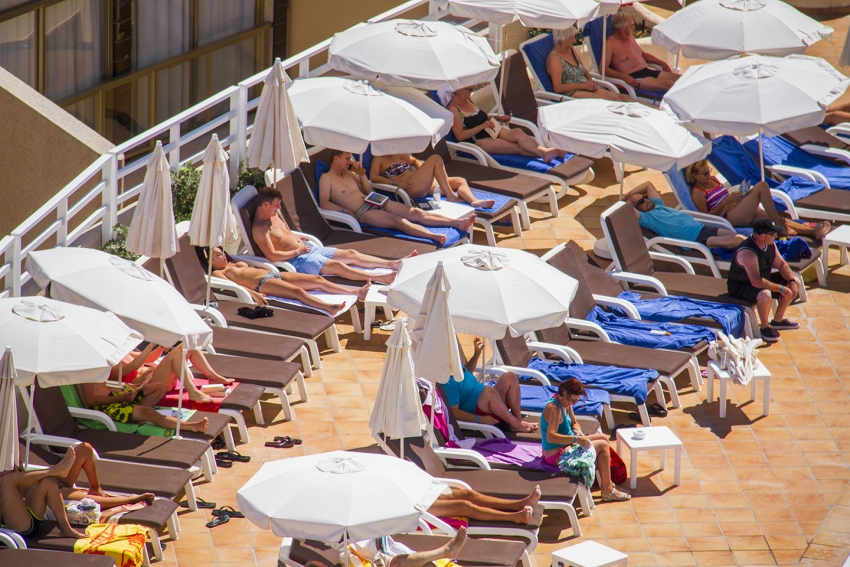 There's two over there, run: Lounger wars are a hotel's worst nightmare www.photosgrancanaria.com

You know the drill; You wake up at a civilised time, head down to breakfast, then wander out to the pool only to find that every sun lounger is reserved with towels. Check out the hotel video below for a classic 08.00 lounger dash in Gran Canaria.

It's one of the great frustrations of hotel holidays in Gran Canaria and indeed, all over Spain and the Mediterranean. So far nobody has come up with a decent solution (other than having enough loungers for everyone: You pay the money, you get a lounger).

Do you throw them in the pool, take them off and subtly move the loungers, or ask the hotel staff to move them for you?

Towel wars aren't just an irritation; There are plenty of full blown arguments, even fist fights recorded on video and posted on YouTube.

From the videos we've seen, German tourists get a bad rep. Most lounger dashes we've seen involve mostly British tourists (although maybe that's because the Germans get up even earlier to reserve their beds). The Scandinavians largely avoid the problem by booking apartments or rooms in smaller hotels where lounger pressure is lower. Even when there's a shortage, they work out their own fair system without acting like angry children.

What's a hotel to do?

Spare a thought for the hotels, and especially their poolside staff. There is no simple solution to the problem.

Hotels are there to make their guests happier and nothing makes a guest less happy than getting up early to reserve a lounger only to find that the staff have removed it. It makes them crazy, and far more likely to go postal on Tripadvisor. Lounger-less guests, of course, are in just as much of a foul mood. The hotel can't win.

Others allow guests to remove towels from unused loungers after a set period of time. But who monitors this, and who deals with the irate towel owner when they come back and find a stranger on 'their lounger'.

It's really not the lifeguard or pool attendant's job to deal with towel rage; Getting between an angry tourist and their lounger just isn't in the job description

On Gran Canaria's beaches, the problem is solved by charging for the loungers and parasols. Maybe hotels need to assign lounger space along with their rooms. They could charge extra for poolside legroom and great views of the volleyball court. It's a thought, but we can't see it working out.

If you wake up early and there are lots of free sun loungers, then by all means reserve one. With your bottom. Otherwise go and have breakfast and take your chances later on like a grown up. Otherwise, hotels will have to start treating their guests like little children and nobody wants that.

If you arrive at the pool late and there are no loungers left, then we have a perfect solution: Just go to the beach. The sand is far comfier than a plastic lounger and there's always plenty of room in the sea.

In Gran Canaria, you're spoilt for choice as we have 80 beaches to choose from.

We have 3660 guests and one member online