Are The Canary Islands Really Named After Big Dogs? 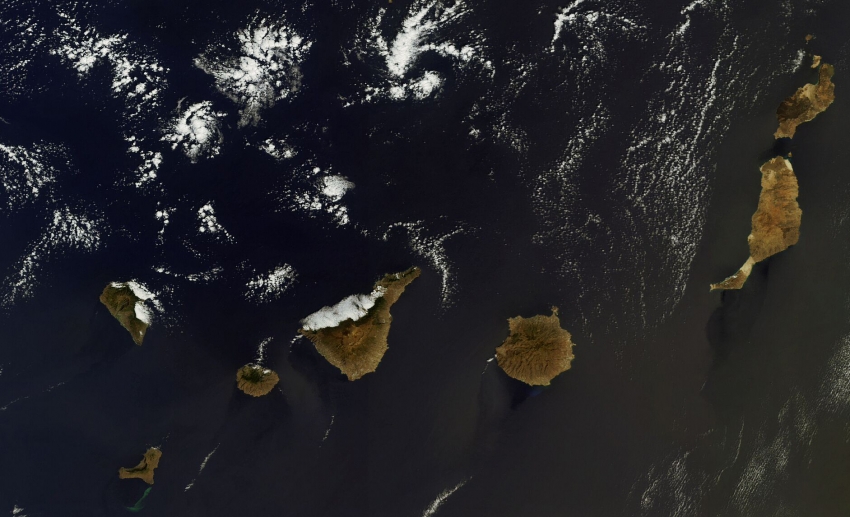 Where did the Canary Islands get their name? Well, it's not from the Canary, as the bird is named after the islands rather than the other way round. Most people seem to think the islands are named after dogs, but we have our doubts. Here are the different theories.

The most common explanation of the name is that it comes from the Latin name Canariae Insulae, meaning "Islands of the Dogs". The story is that Mauretanian king Juba II, a firm ally of the Romans, sent an expedition to the Canary Islands that found "vast multitudes of dogs of very large size".

Pliny the Elder recorded Juba II's discoveries in his Natural History, written in 77 AD (see below). He specifically referred to the big dogs on the island of Canaria.

The Canary Islands, and especially Lanzarote and Fuerteventura, once had a big colony of Mediterranean monk seals. They were known as sea wolves by early sailors. Although now extinct in the Canary Islands (a few survive in Madeira to the north), Monk seals may well have been the 'dogs' that gave the islands their name.

This theory received a recent boost when archaeologists discovered a Roman settlement on Lobos islet just north of Fuerteventura. It appears they travelled to the Canaries to harvest purple dye from Murex shells and used Lobos as a base to collect them.

Nobody is quite sure why the Romans chose Lobos islet, but it was probably because it had lots of seals and seabirds to eat.

The giant lizards of the Canary Islands don't grow longer than about 80cm long, but they were once much bigger. Before humans and their cats, rats, and hedgehogs, Canary Islands giants lizards were real giants. There are subfossil records of lizards up to 150cm long just a few thousand years ago.

Maybe Juba II's expedition found huge lizards on the Canary Islands rather than big dogs. The lizards are mentioned by Pliny on the island of Capraria.

Another potential explanation is that the islands were originally settled by the Canarii tribe of Berbers from the Atlas mountains in what is now Morocco.

We know that the original Canarians, often referred to as the Guanches, were descended from Berbers although nobody is sure how a mountain people got to the Canary Islands.

It's possible that Canarii tribespeople were taken to the Canaries,  either by the Romans or the Phoenicians. Why? Either to set up a supply base outside the Mediterranean or to get rid of a rebellious tribe.

Interestingly, a Guanche legend said that they were descended from royalty from a faraway place.

Almost everything written about the Canary Islands in antiquity comes from this passage of Pliny's Natural History from 77 AD, although it is based on earlier information recorded by Juba II.

'Some people think that beyond the islands of Mauretania lie the Isles of Bliss (Canaries), and also some others of which Sebosus before mentioned gives not only the number but also the distances, reporting that Junonia (La Palma) is 750 miles from Cadiz, and that Pluvialia (El Hierro) and Capraria (La Gomera) are the same distance west from Junonia; that in Pluvialia there is no water except what is supplied by rain; that the Isles of Bliss are 250 miles WNW from these, to the left hand of Mauretania (Morocco), and that one is called Invallis (Tenerife ?) from its undulating surface and the other Planasia (Gran Canaria ?) from its conformation, Invallis measuring 300 miles round; and that on it trees grow to a height of 140 ft. About the Isles of Bliss Juba has ascertained the following facts; they lie in a southwesterly direction, at a distance of 625 miles sail from the Purple Islands, provided that a course be laid north of due west for 250 miles, and then east for 375 miles; that the first island reached is called Ombrios (El Hierro), and there are no traces of buildings upon it, but it has a pool surrounded by mountains, and trees resembling the giant fennel, from which water is extracted, the black ones giving a bitter fluid and those of brighter colour a juice that is agreeable to drink; that the second island is called Junonia, and that there is a small temple on it built of only a single stone; and that in its neighbourhood there is a smaller island of the same name, and then Capraria, which swarms with large lizards; and that in view from these islands is Ninguaria (Tenerife ?), so named from its perpetual snow, and wrapped in cloud; and next to it one named Canaria (Gran Canaria), from its multitude of dogs of a huge size (two of these were brought back for Juba). He said that in this island there are traces of buildings; that while they all have an abundant supply of fruit and of birds of every kind, Canaria also abounds in palm-groves bearing dates and in conifers; that in addition to this there is a large supply of honey, and also papryus grows in the rivers, and sheat-fish; and that these islands are plagued with the rotting carcasses of monstrous creatures that are constantly being cast ashore by the sea.'

For more early references to the Canary Islands, see this excellent history page on the Isaac Newton Group Of Telescopes website.

This module can not work without the AcyMailing Component

We have 2992 guests and no members online