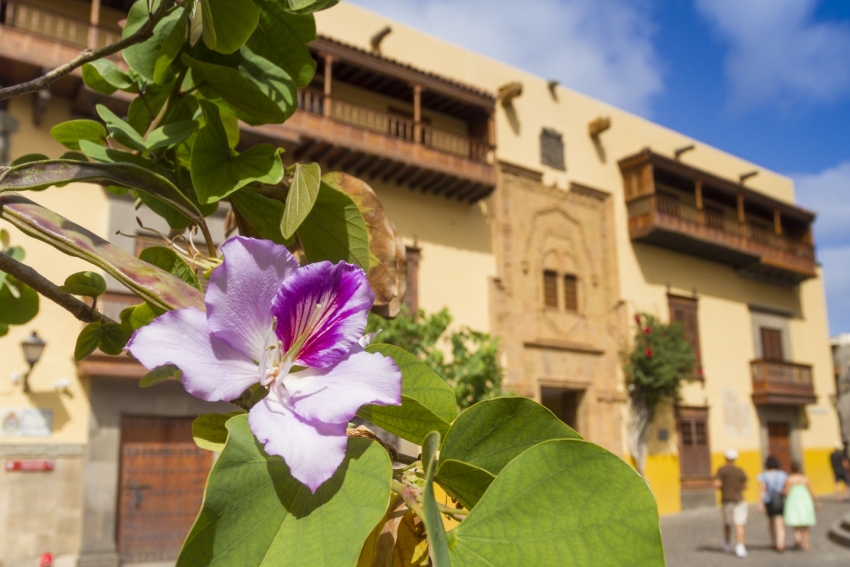 Columbus made his mark in Vegueta Gran Canaria

Christopher Columbus stopped in Las Palmas de Gran Canaria in 1492 on his way to discovering the Americas not because he wanted to, but because his crew sabotaged his ship within three days of setting sail from Spain.

Apparently they weren't as convinced as he was that sailing west was a good idea. Not because they thought the world was flat, but because they knew that China was too far away to sail to in a wooden ship.

It was the first of many man-management problems from Colombus during his time in the Americas. He tricked the locals and the first colonists, had to hang some of his crew, earned the nickname "the tyrant of the Caribbean, and even got shipped back to Spain in chains.

Columbus looms large over Las Palmas' history because he is the most significant figure to visit, but he's gone through a serious image reinvention in the last few years;

From intrepid explorer of the ocean blue to disease spreading, slavery mongering opportunist.

His attitude, plus his experience of how the Spanish were subduing the natives in the Canary Islands,  set the tone for the way the Europeans treated the original Americans for centuries.

That said, his attitude to slavery and loot was pretty much standard at the time so it's unreasonable to blame him personally just because he got there first.

The Casa de Colón museum in Vegueta was the governor's mansion when Columbus sailed into town, but nobody knows if he ever set foot inside it.

He probably spent most of his time on his ships supervising repairs and supplies ( and making sure that the crew didn't do any more damage). Maybe he popped in for a drink, or to use the loo.

In any case, the Casa de Colón is a gorgeous example of Canarian architecture and worth visiting just for the interior courtyards. Entry costs a few euros and you get to  see a full-scale replica of Columbus' cabin along with lots of period maps, paintings and navigation equipment.

It's also worth walking around the building as the ornate stone doors and windowsills were made by South American stonemasons who carved maize cobs, jaguars and pineapples into long before most people in Europe knew what they were.

Alex says: Don't get too close to the macaws in the museum patio; they are a bit jaded and inclined to nip. They've eaten the warning sign!

Between Gran Canaria And America

After Gran Canaria Columbus sailed west but stopped again for supplies; maybe even he was a bit scared of tackling the Atlantic. He skipped Tenerife, where the Guanches were still holding out against the Spanish, and resupplied at La Gomera.

In fact, Columbus stopped in La Gomera as often as possible on his four journeys west. This had a lot to do with the beautiful Countess Beatriz de Bobadilla y Ossorio.

Exiled by Queen Isabella because King Ferdinand kept looking at her in court, she governed La Gomera after the guanches rebelled and killed her husband in 1488. She may have been easy on the eye but, even by the standards of the time, she was a vicious woman: Most of island's Guanches were killed or sold into slavery after the inevitable failure of their sticks and stones rebellion.

Was Columbus the heroic explorer who set sail despite everyone believing that he would fall off the edge of the flat world? Not at all! It was common knowledge at the time that the Earth was round and everyone knew that you could get to China and India by going west. They also assumed that the journey was too long for the ships of the time. They were right!

What Columbus did was get his figures wrong and underestimate the size of the world. He believed that he could make it to China and come back laden with spices and gold. After touring the courts of Europe with his get rich scheme he ended up in Spain, where the Spanish court was desperate for cash. Having bet the house on expelling the Moors they were desperate enough to gamble on Columbus' flawed maths. Their wager paid off epically but not in the way anyone expected.

Basically Columbus a brave and stubborn man who got lost in the right direction. He only discovered America because it was in his way.

And while he was an excellent sailor he was a hopeless administrator. As governor of Spain's new colonies he kept sailing off to find a passage to China. Eventually he was shipped back to Spain in chains. Columbus was pardoned but never got his hands on much of the gold that flowed from the continent he discovered. He died chasing the Spanish court around the country demanding money and recognition.

But where is he now?

Columbus was buried in Valladolid but his remains were moved to Seville and then to Santo Domingo in the Dominican Republic. Then they headed to Cuba and eventually back to Seville. Only they may still be in Santo Domingo. His bones have probably seen more of the world than Columbus did when he was alive.

Columbus stopped at Maspalomas in 1502 on his fourth and final voyage. After a day taking on water and firewood he sailed away, never to return. The long, straight road from Campo Internacional down to the Maspalomas lighthouse is called the Avenida de Colón in his honour. We wonder what he'd make of Maspalomas now.

We have 6402 guests and no members online