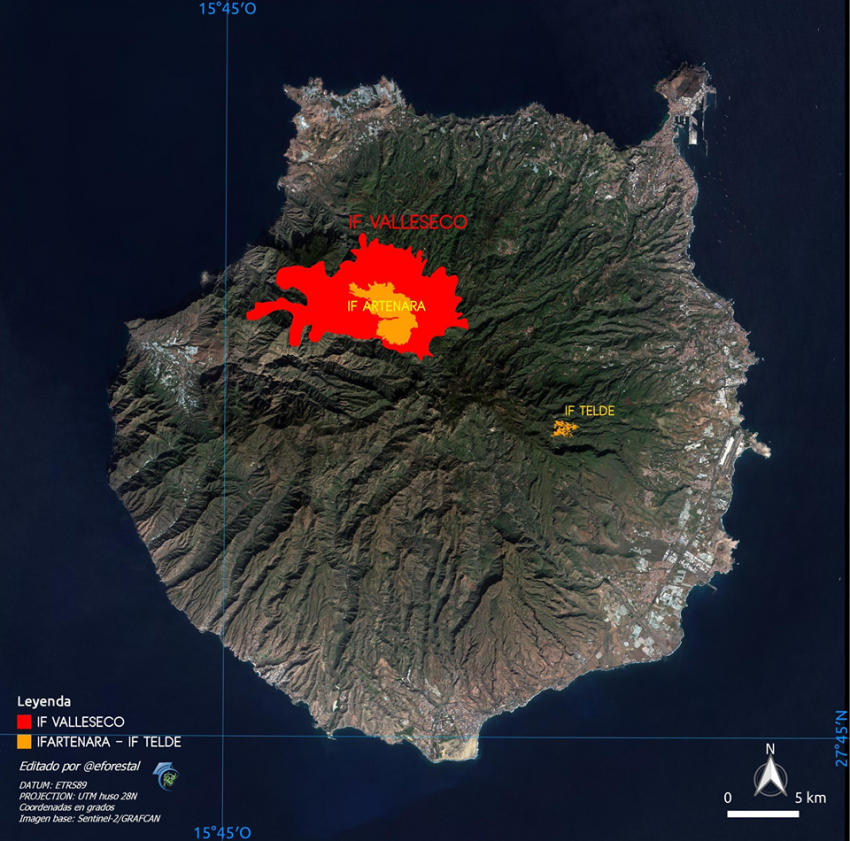 The Gran Canaria fires has burned through the night and is expected to continue to spread today due to high temperatures and winds. The Tamadaba forest in the west is ablaze and possibly unsaveable.

The latest news is that 8000 people have been evacuated and 6000 hectares burned. There are glimmers of hope as the left flank of the fire between Lanzarote and Tejeda was stabilised overnight. However, Tejeda itself is still threatened by another active front.

There are still no reports of casualties or injuries and there has been a huge local effort to move domestic and farm animals to safe areas. People that had to leave their homes are being looked after by local volunteers at evacuation points stocked thanks to donations from supermarkets and food banks and local government stockpiles.

Today, four hydroplanes and 11 helicopters will support 700 people in a desperate bid to at least contain the fire and prevent further damage to forests and homes.

Last night's official press briefing was bleak as we learned that there is almost nothing that firefighters can do to stop the fire in the west until the weather changes. With temperatures of up to 39C expected today, the fire's northern and western fronts are expected to advance during the day. Late yesterday afternoon the fire made its way into the Tamadaba forest, generating a huge cloud of smoke.

The huge Tamadaba pine forest in the north west, an iconic area known as the Green Lung of Gran Canaria, was expected to burn completely over the next 48-96 hours. It is a steep and remote area with no access roads and there is little fire crews can do to stop the fire.

However, initial essessments this morning suggest that the fire at Tamadaba is not as bad as it seemed. Firefighting efforts in the area will focus on stopping the flames from climbing out of the Tamadaba area and threatening La Aldea and even the Mogán area.

The Agaete Valley is also at risk with the fire arriving via the clifftops at its head and spreading down the valley.

Further around to the north, the upper parts of the Valleseco valley and the forests above Fontanales are still ablaze. Both towns have been fully evacuated. Artenara was surrounded by fire last night, trapping 50 people inside the community centre.

The island's fire-fighting teams, already amongst the best-equipped and most numerous in Spain, have received extra support from all over the Canary Islands and mainland Spain and the fire team currently assembled is the largest ever in the Canary Islands.

We have 2712 guests and no members online