New Gran Canaria Fire Out Of Control Amid New Evacuations 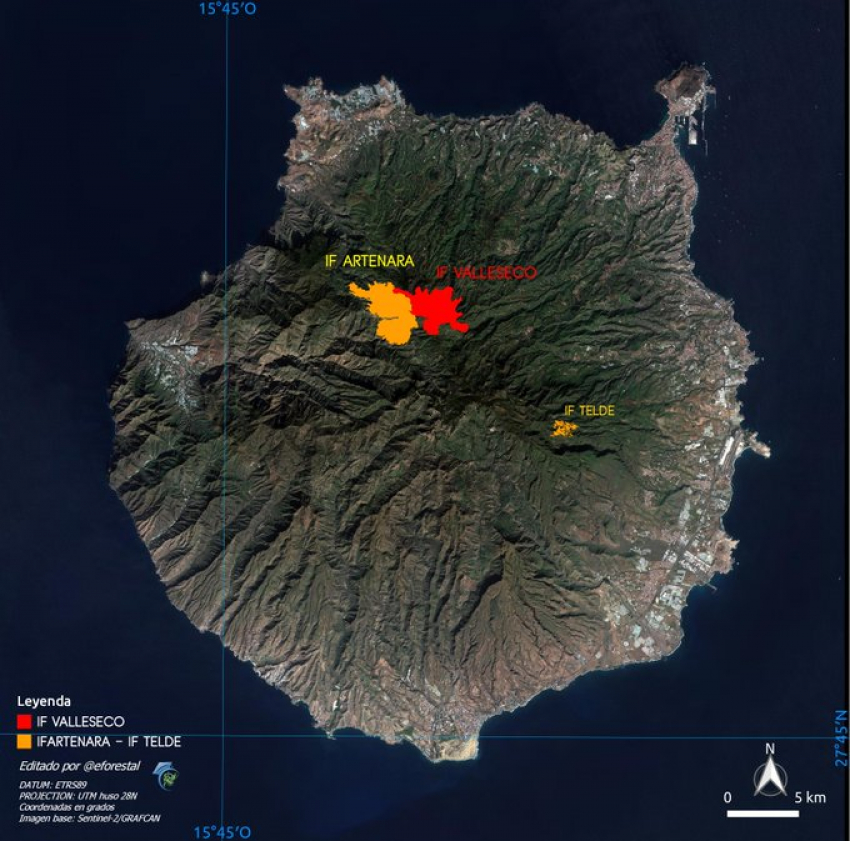 A new fire that started in the forest just above Valleseco in the northern Gran Canaria highlands has now burned over 1000 hectares of forest and countryside and is spreading.

The fire is now buring along a wide active front that runs all the way from Cruz de Tejeda and Fontanales to Artenera and Fagajesto. It is a very different fire from last's weeks blaze because it is burning through the tree tops rather than along the ground. Strong winds and high temperaures make it almost impossible to control.

The red area on the map shows the current extent of the fire with the yellow areas showing last week's fires.

Over 2000 people from six municiplities have left their homes, including the population of Tejeda town which was evacuated for the second time in three days. Cruz de Tejeda was surrounded by flames last night but seems to have escaped serious damage. Fontanales town has also been evacuated.

There is no information about the cause of this fire although the press has reported that a small fire was started deliberately in the same area back in May.

In a rare spot of good news, a local animal-loving collective managed to get back up to rescue a donkey that was left behind at Cruz de Tejeda during the emergency evacuation of Cruz de Tejeda on Saturday evening.

Nine helicopters and two hydroplanes are currently battling the fire along with hundreds of firemen and forestry workers. Firefighting efforts are currently concentrated on protecting towns and homes and on holding back the flames at critical points to prevent it from spreading into new forest areas and valleys.

Most highland roads in Gran Canaria are blocked off. Please do not approach the area.

Note for visitors to Gran Canaria. This fire is a long way up in the Gran Canaria mountains and will not affect flights or the resort areas.

We have 2799 guests and no members online