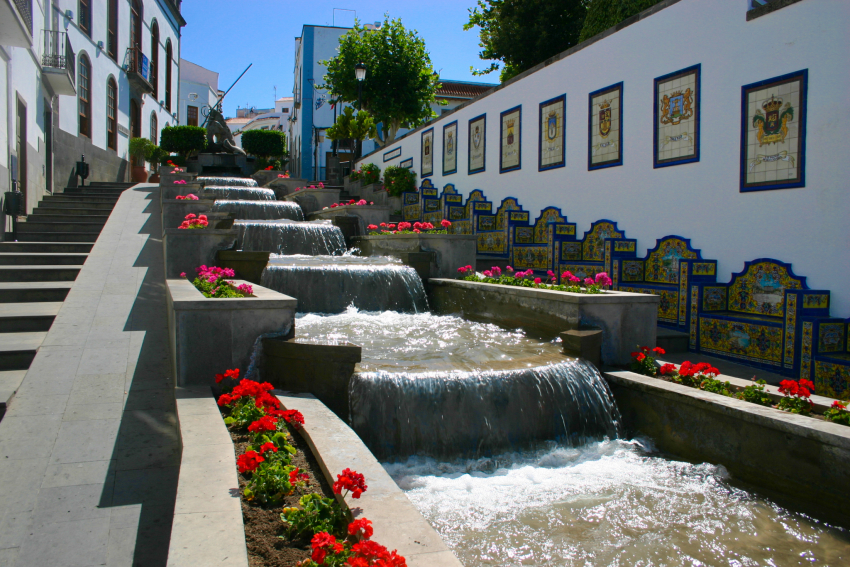 The Villa de Firgas is one of the most popular towns in north Gran Canaria for people who really want to get away fro it all and visit authentic local spots. Gran Canaria Info fans love its peaceful atmosphere and famous street waterfall and mosaics. 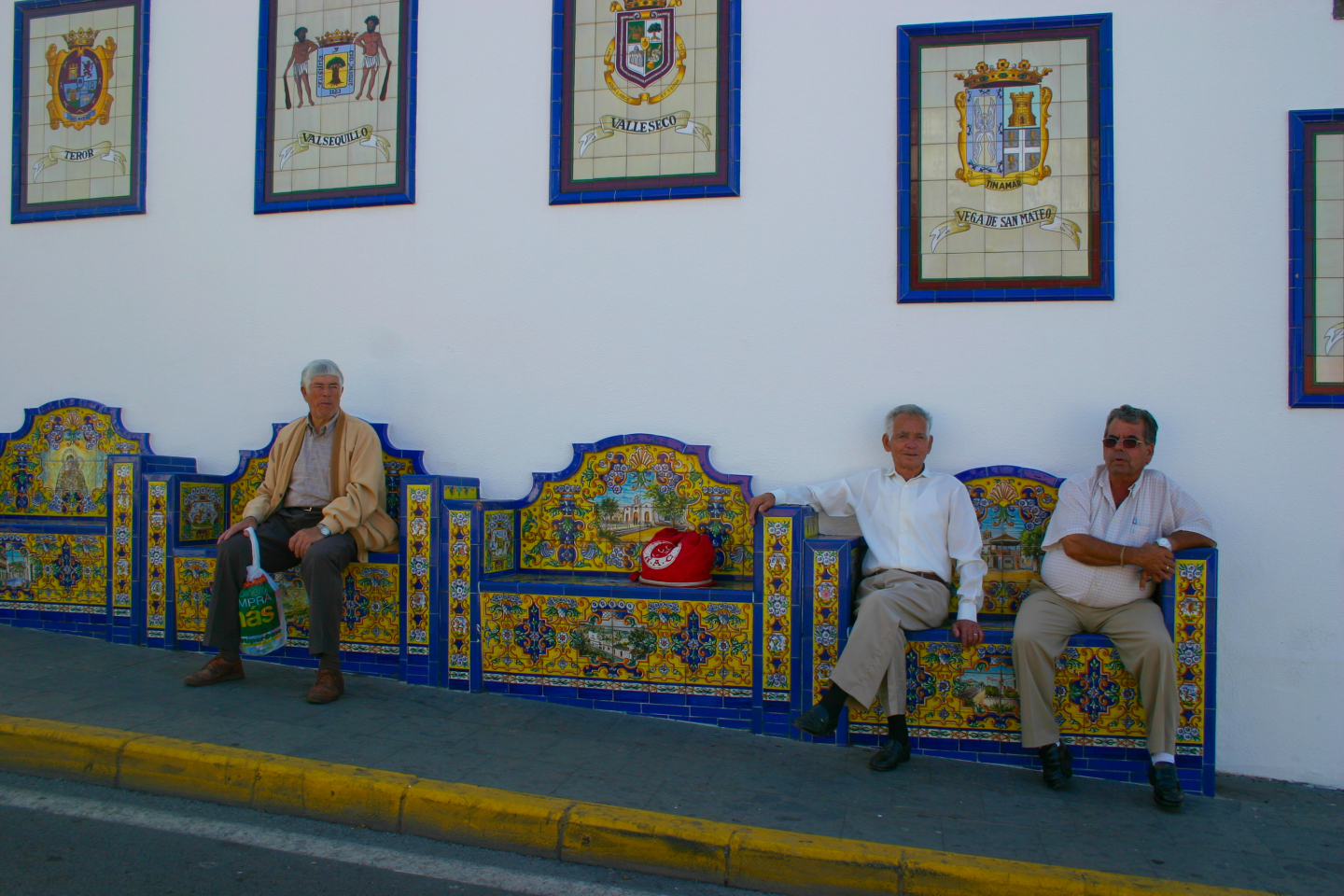 You'll notice that lots of the water bottles sold in Gran Canaria are made by the Firgas company. This is because the area, actually Gran Canaria's smallest municipality, has rich water springs and a long history of chanelling water to its banana and watercress farms. 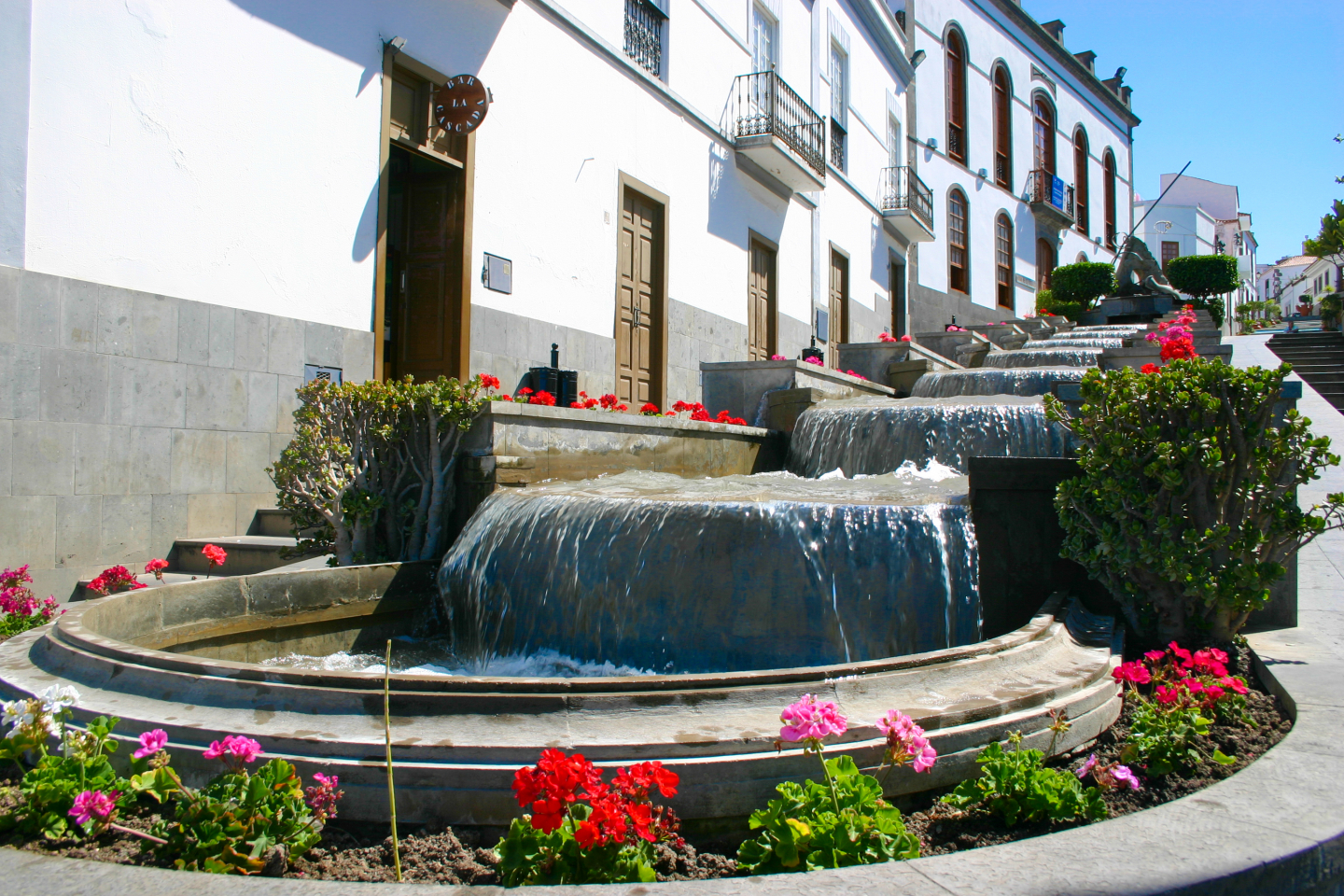 The town celebrates its heritage at the Paseo de Canarias: A long set of steps with a waterfall right down the middle. The sides of this pretty street are decorated with a mosaic made from colourful Sevilla tiles. Each section of the mosaic celebrates one of the twenty Gran Canaria municipalities. 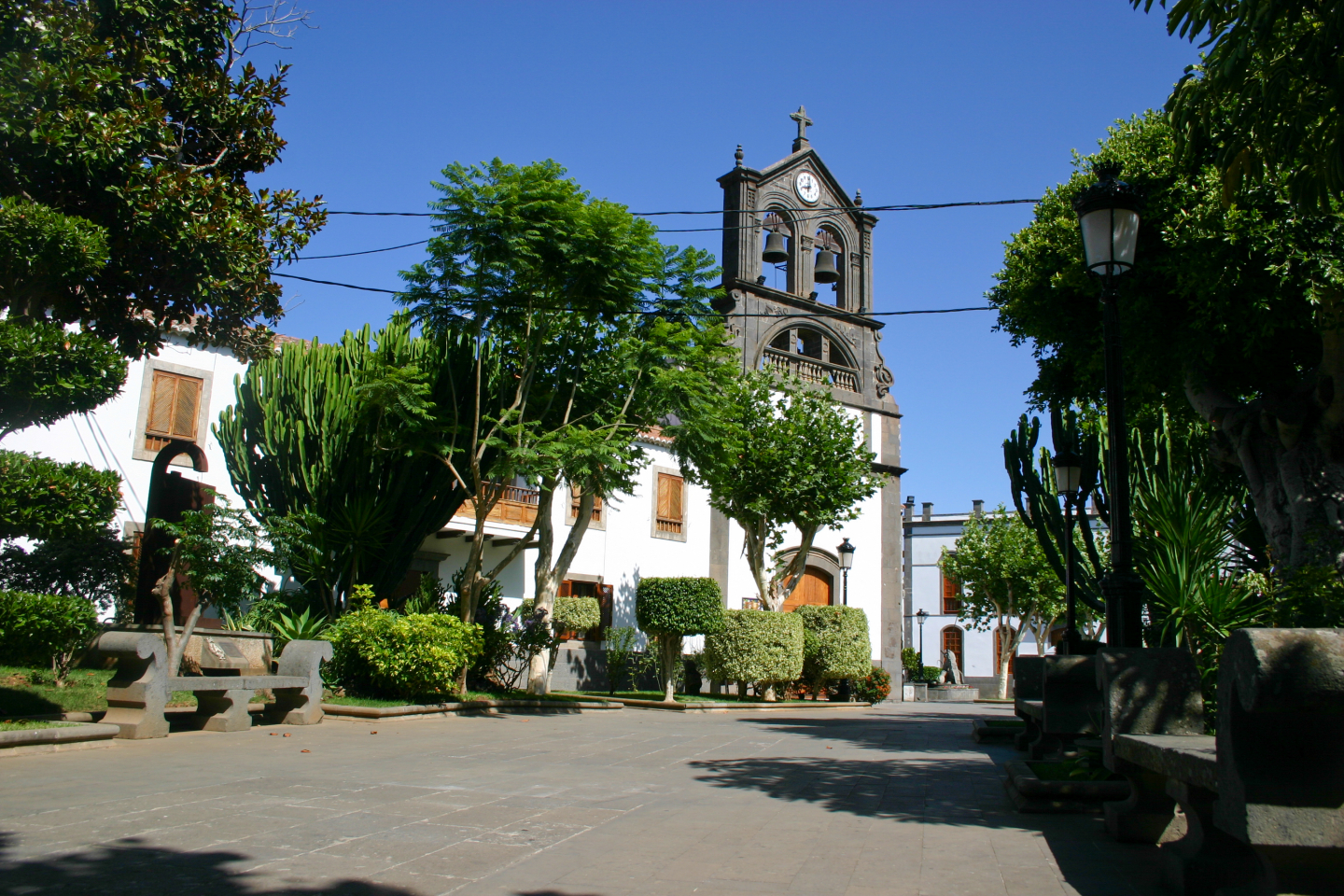 El Paseo de Canarias is in the old centre of Firgas town right by the Plaza and the San Roque church. It has an attractive interior that is worth seeing if the doors are open when you visit.

The church dates back to 1845 and replaced an older one built on the site of an ancient Canarii temple back in the 16th Century.

Don't miss the restored water channels in the plaza with spots for laundry washing. This ancient water channel actually runs all the way to Arucas and was an important source of water in the area for hundreds of years.

On weekdays you can also visit the old water mill downhill from the plaza.

Arucas is at its livliest in August during the San Roque fiestas.

How to get to Firgas town

Landlocked Firgas municipality is located in north Gran Canaria and is 465 metres above sea level. 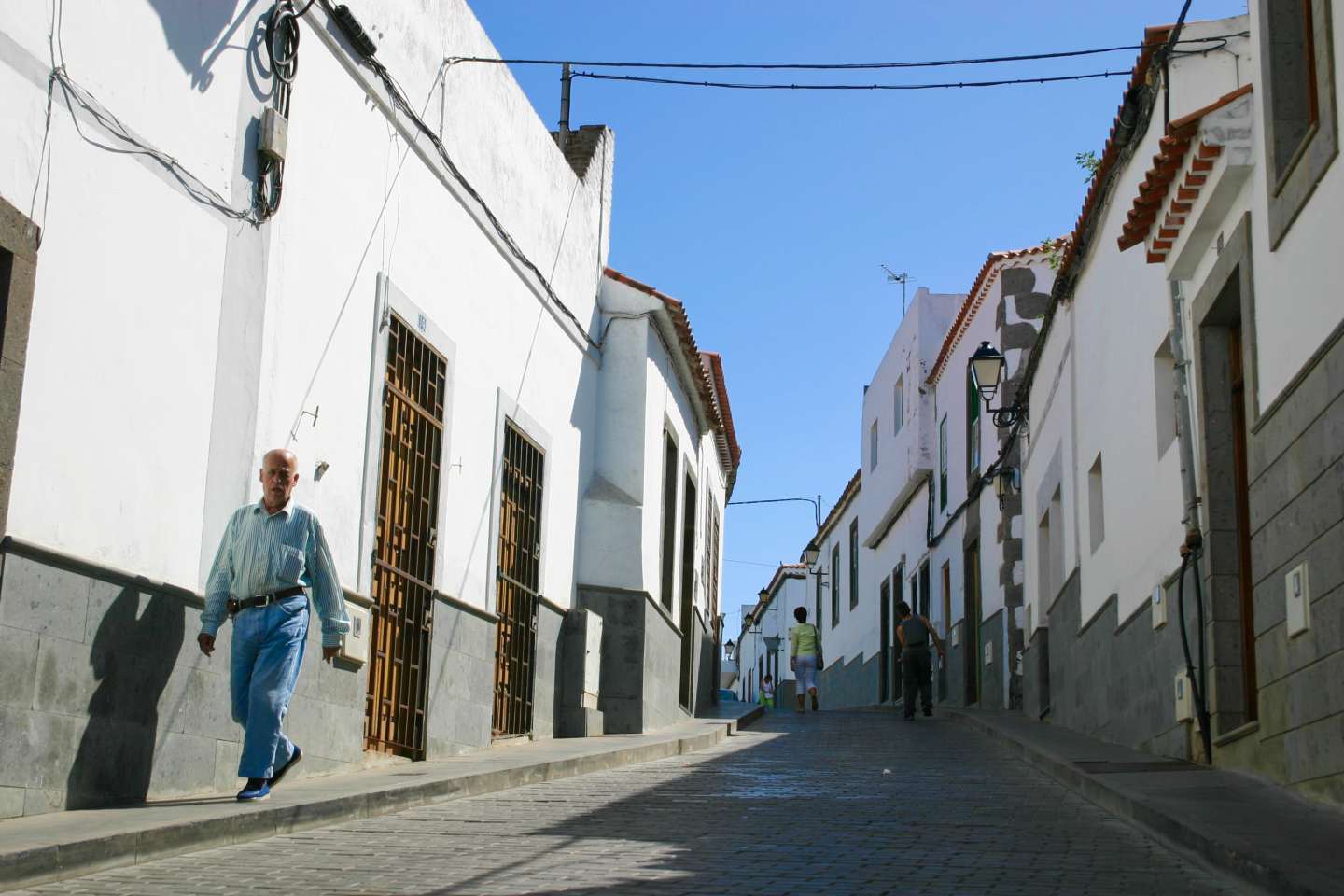 The easiest way to drive to Firgas is to start in Las Palmas and head west on the GC2 motorway and turn inland along the GC20 road. Go past Arucas and go straight through all the roundabouts on the GC20 until it turns into the GC30 and you reach the turnoff for Firgas.

Lex Says: As with all driving in Gran Canaria, use Google maps on your phone for exact directions. 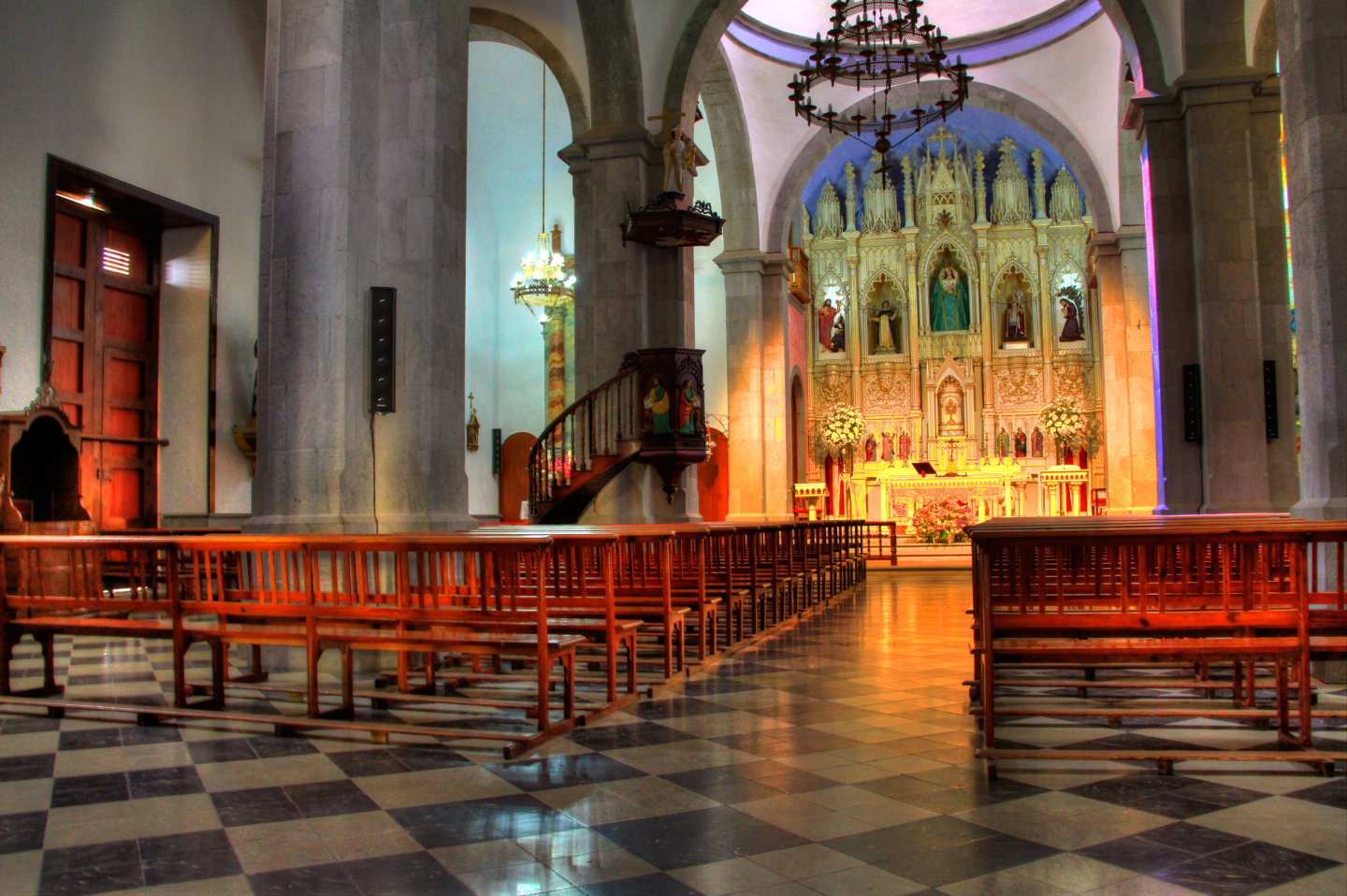 There is almost always plenty of parking in Firgas close to the church and you can't really get lost in the town itself.

If you don't want to drive, catch one of the regular blue buses (line 204) that head to Firgas from the San Telmo bus station in Las Palmas.

Walkers will want to visit the nature reserves at the Barranco de Azuaje and the Doramas Forest as they are amongst the greenest spots in Gran Canaria and have the largest remaining areas of the island's endangered laurel forests.

We have 3382 guests and no members online