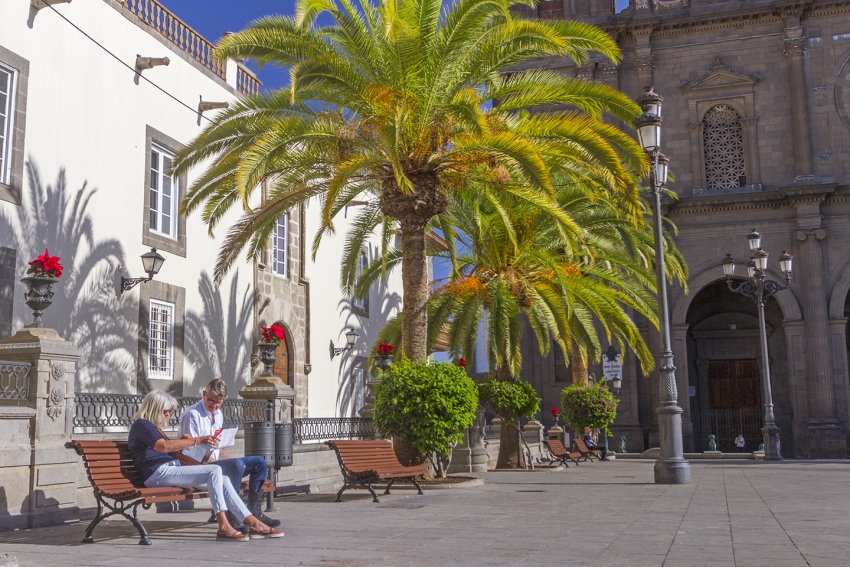 La Vegueta was the original Las Palmas and hasn't changed much since Columbus visited, except the bits that the Dutch burned down.

Founded in 1478 by island conquistador Juan Rejón, the original settlement was more military fort than city and was called the Real de Tres Palmas because of the three palm trees on the spot. The town that grew around the fort was called La Vegueta de Santa Ana and eventually grew into the modern city of Las Palmas. Nowadays the original old town area is known as Vegueta.

Alex says: The tres palmas are still there (well, their descendants) in the Plaza de Antonio Abad.

Vegueta was thus the first official Spanish city founded in the Atlantic as they expanded into the Americas. It was a strategic city for centuries as Spain's warships and treasure ships resupplied here before heading to the colonies. Returning ships brought South American treasures, from gold to potatoes, back with them. 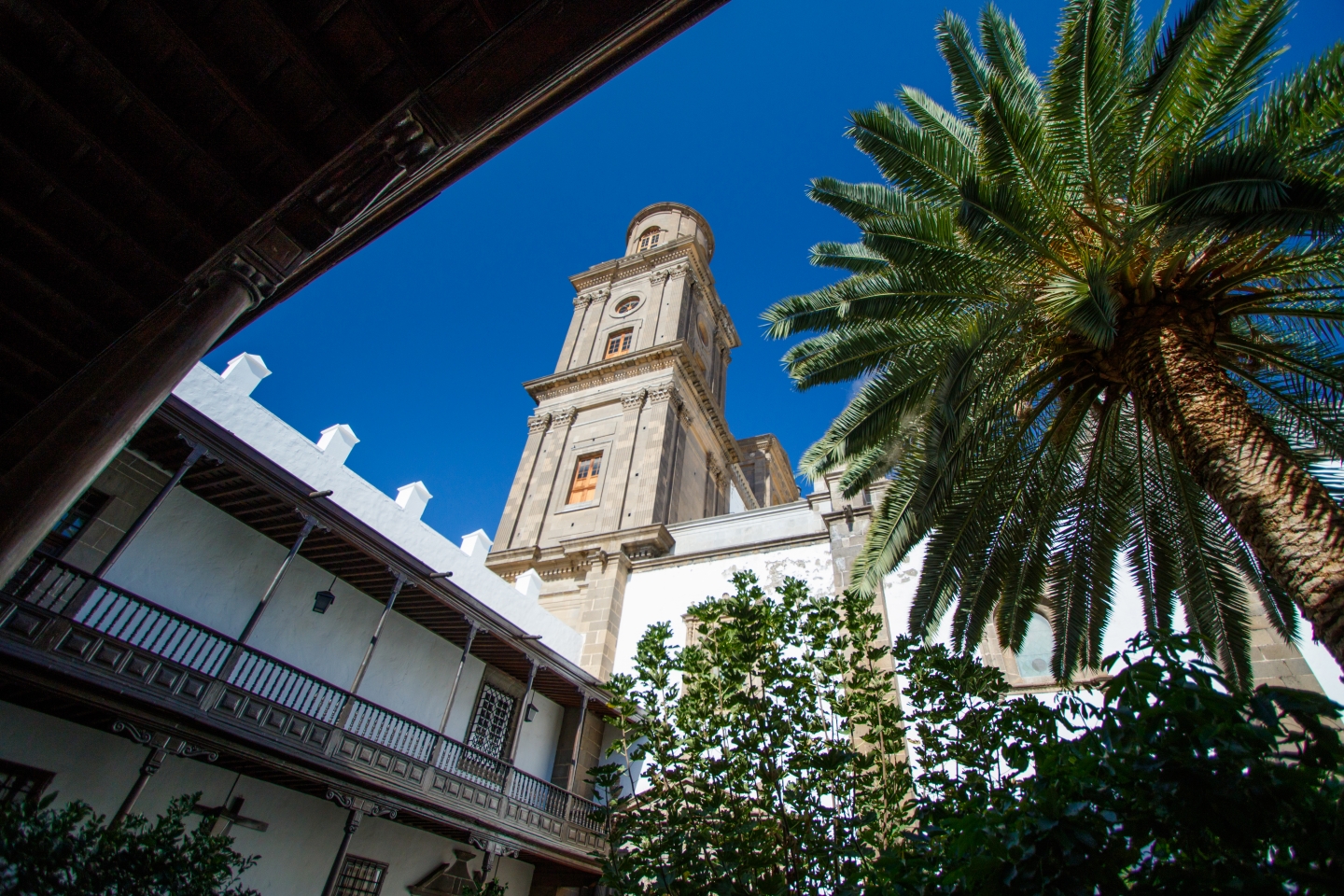 The first five year's of Vegueta's history were about conquest rather than settlement and Las Palmas must be the only European city that was besieged by people from the Stone Age. The embryonic city was only three days old when it was attacked by an army of 2000 Canarii (Guanche) warriors; It took a cavalry charge led by Rejón himself to defeat them.

After the battle of the Guiniguada, the Canarii opted for guerilla tactics and allowed Las Palmas to fortify itself. Given their subsequent defeat and extinction, it was probably a mistake.

Learn more about the original Canarians at the Museo Canario. 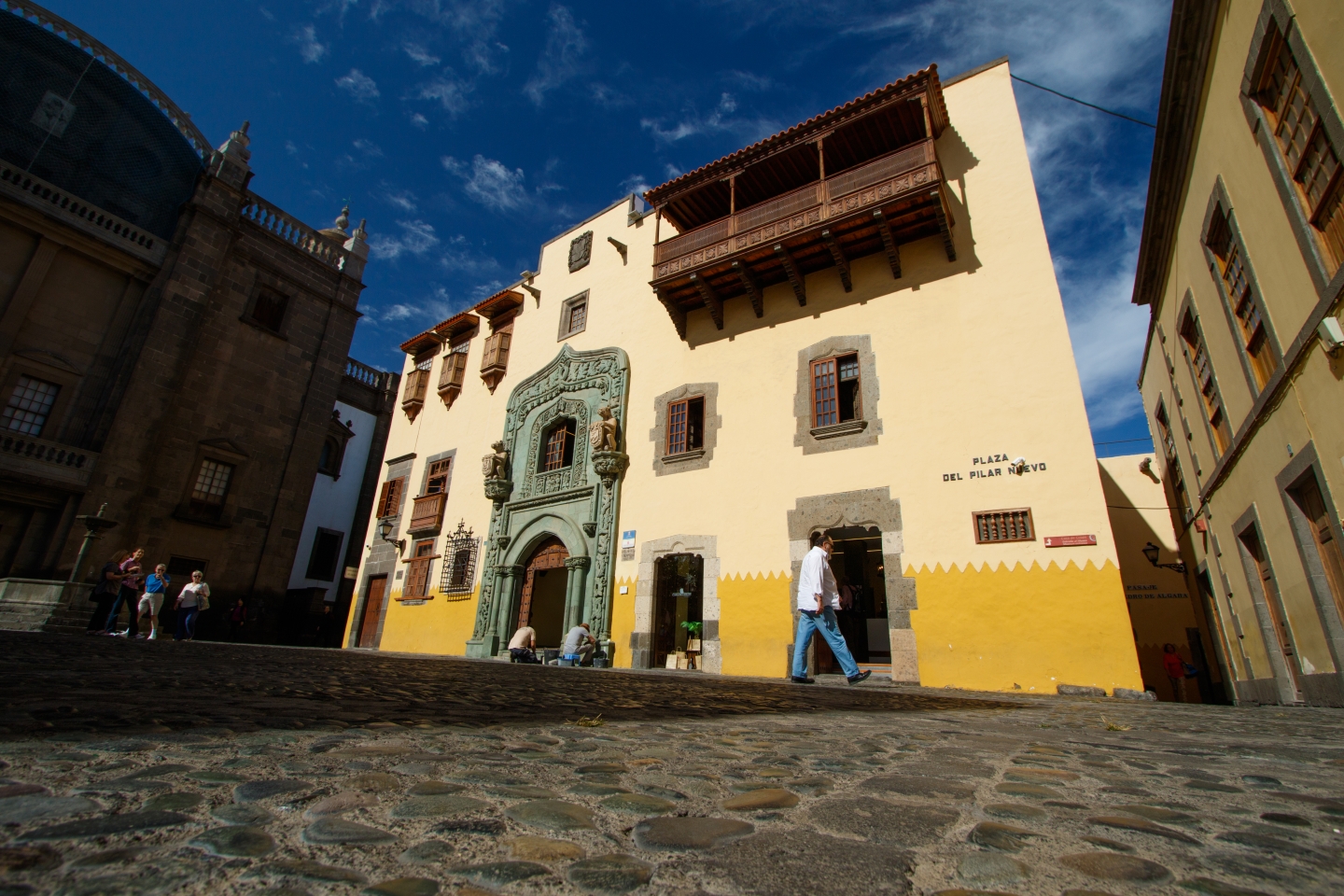 Vegueta's most famous visitor is celebrated in street and plaza names, and at the Casa de Colón museum. He first visited in 1492 and returned twice during his four voyages to the Americas.

While Columbus has gone through a serious change of image in recent years, from heroic discoverer of America to slavery-mongering incompetent who got lost and accidentally bumped into a new continent, he's still the most significant figure in Vegueta's history. However, the main reason he stopped in Gran Canaria was that his crew mistrusted him so badly that they sabotaged one of his ships.

Learn more about Columbus, the Canarian connection with the Americas, and 15th Century ships and navigation, at the Casa de Colón museum.

All is now what it seems: Gran Canaria History: The Truth About Columbus' House 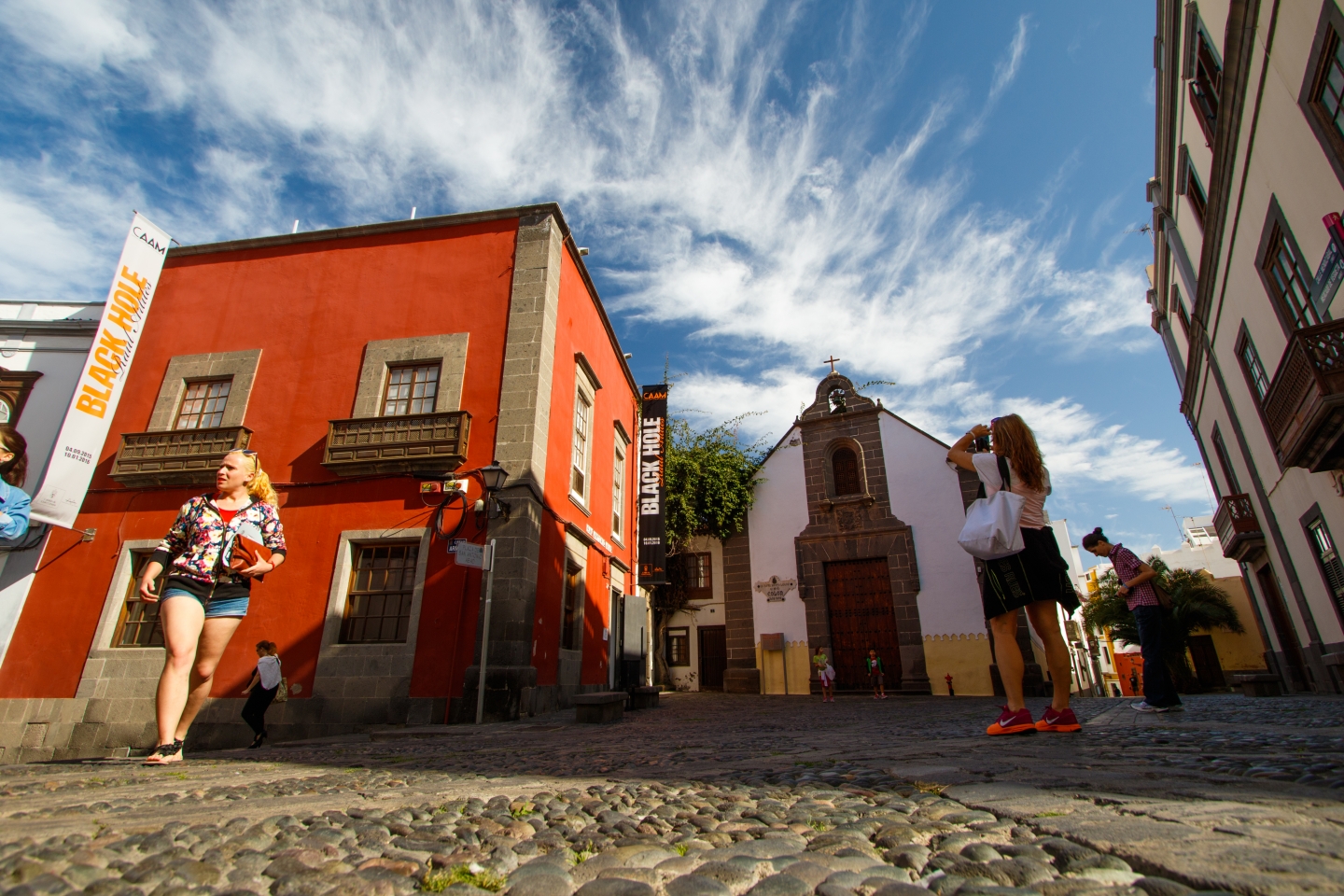 Las Palmas' history stayed lively all through the era of buccaneers and privateers. In 1595, a fleet of 27 English vessels commanded by John Hawkins and Francis Drake attacked Las Palmas city. They, along with numerous other privateers and pirates, failed to make much impression on the city's defences.

However, in 1599 a vast Dutch fleet commanded by Admiral van der Does overwhelmed the Spanish defenders, stole the city's riches and burned many of its buildings. His success was short-lived because he overreached and tried to march inland to take the rest of the island. Highly mobile local militias outfought his heavily armoured troops and injured or killed many of them. Van der Does retreated to the city, then to Maspalomas where many of his injured men died.

The Dutch admiral's bad luck continued after he left Gran Canaria and sailed south towards the Cape Verdes and West Africa. Tropical diseases like yellow fever and malaria ripped through his sailors and soldiers and a vast number, including the admiral himself, died within months.

Van der Does' sacking of Las Palmas was the last great historical event in the city until General Franco started his invasion of Spain from a hotel in Triana in 1936. The city never regained the status it once had as the launching pad for the New World, but did become rich several times thanks to agricultural booms like sugar cane, cochineal and wine.

The Vegueta you have to see 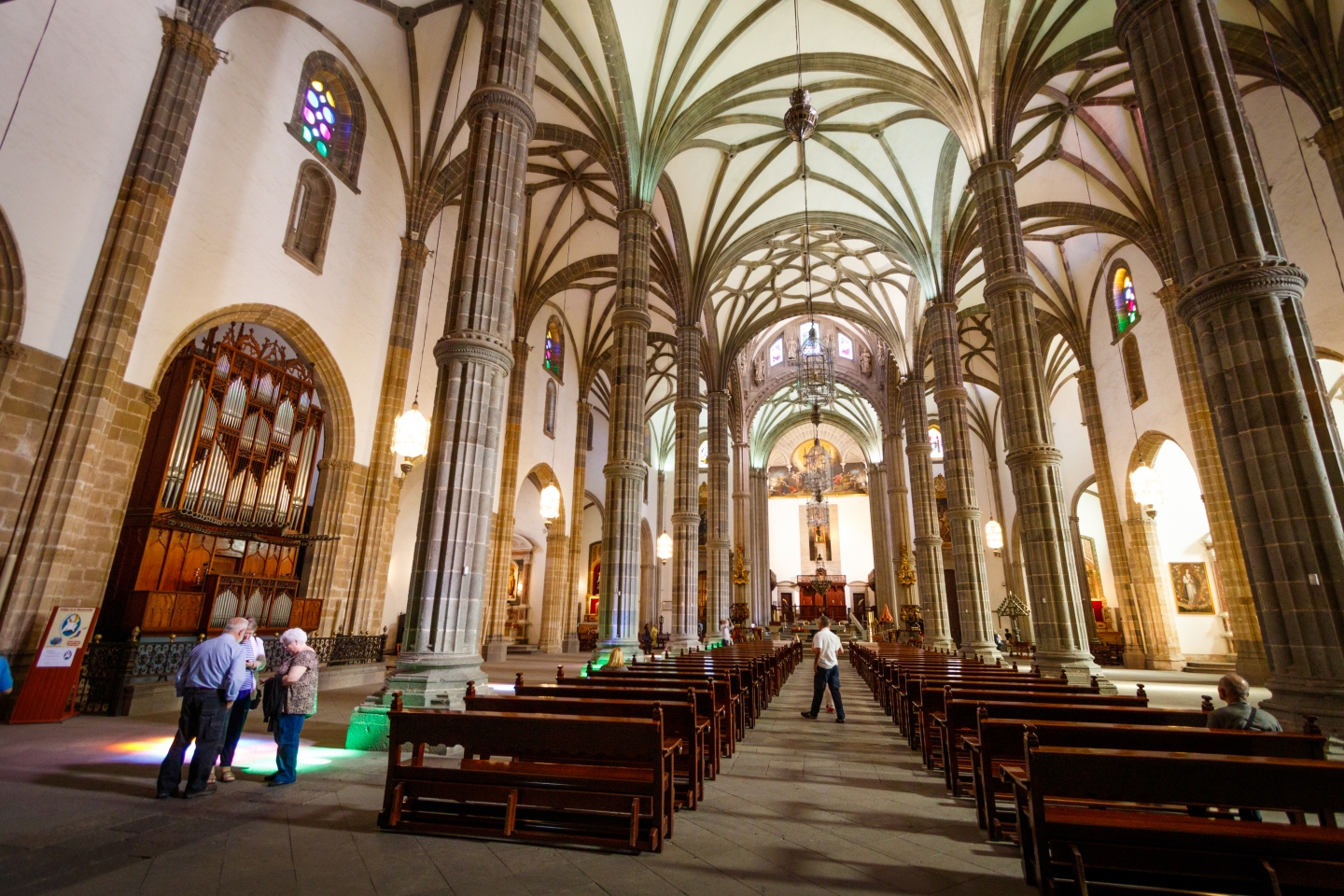 The entire history of Vegueta is there to see in the Santa Ana cathedral. It was started over 500 years ago and still isn't finished. Every time the city boomed, the cathedral was improved and it's now a fascinating mix of styles and tastes.

Read all about Las Palmas' cathedral.

To really appreciate Santa Ana, you have to see it from all perspectives. Start in the Santa Ana square in front of the main doors, then head up the stairs of lift to the roof (entrace just next to the front door). Then, head to the south wall of the cathedral and go into the silver museum; this gives you access to the spectacular interior of the cathedral with its elegant columns modelled on palm trees, mummified bishop (side chapel in the south-east corner), and numerous altars and chapels.

Of course, history in the Canary Islands started way before the arrival of the Spanish. To learn more about the island's original inhabitants, head to the Museo Canario; it's small but full of info, mummies, pottery and models. 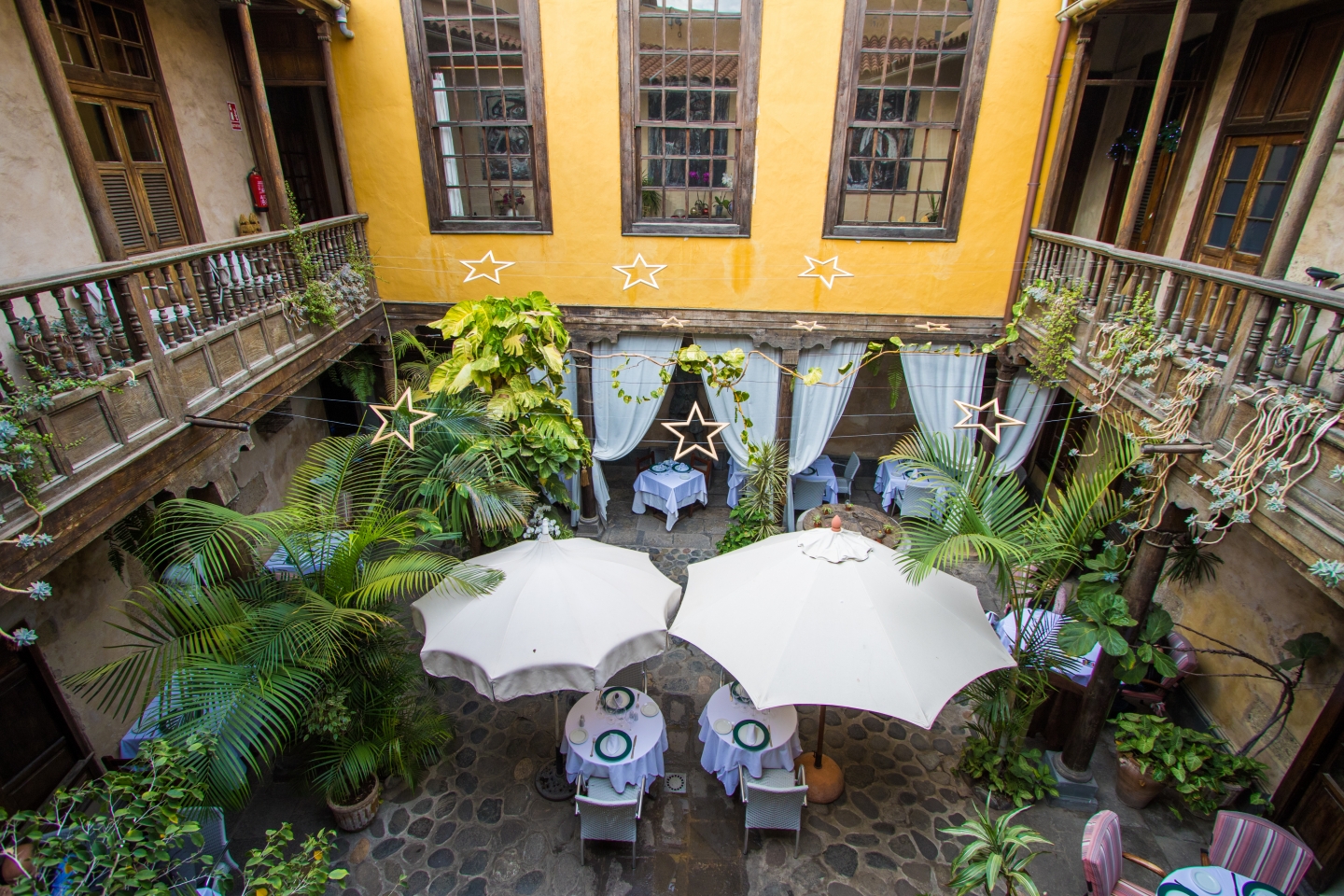 If you've walked Vegueta's cobbles and visited its sights but still haven't had your fill of the old town, we know exactly where you should go.

The Casa Montesdeoca restaurant is just yards from the three palms that mark the spot where Las Palmas was founded and around the corner from the Casa de Colón and the Antonio Abad chapel where Columbus gave his last sermon in 1492.

It's set in the interior patio of a 16th Century mansion that survived pirate attacks and Dutch sackings and is the only one of its kind open to the public in the whole of Gran Canaria.

The courtyard, full of tropical plants and with original period features like wooden columns, well, and stonework is an oasis of calm and the perfect spot to spend a lazy afternoon or evening just taking in the atmosphere of Vegueta.

We have 4439 guests and no members online