Everything You Need To Know About Las Palmas Carnival 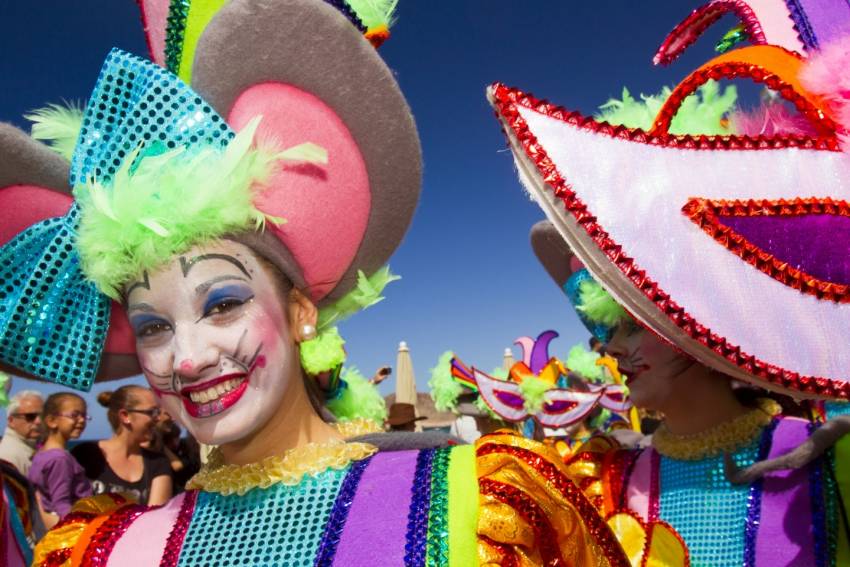 Carnival in Gran Canaria lasts for a month

With everything from drag queen galas and wailing widows to tapas stands the Las Palmas carnival is an epic fiesta. It's got be Europe's biggest outdoor party and stretches out over three weeks, four if you count the times it takes to clear up the sequins.

If there's one bit of advice we can give you about enjoying the Las Palmas carnival, it's to pick your events carefully.

If you want to dance the night away to reggaeton music surrounded by rum-sozzled teenagers, head to the main parade after dark and pick a float. If you'd rather a more sedate and traditional carnival event, head to Vegueta for the white carnival (but avoid the rum-sozzled teenagers throwing white powder around). If you just want to hang out and absorb the atmosphere, the food vans and pop-up bars in Santa Catalina square are lively almost every night.  We think that the most attractive event is the Carnaval al Sol parade along the Las Canteras beachfront. All the dancing and drumming troupes take part and it's a lively and colourful event without the debauchery of the late night parades.

Alex says: Carnival in Gran Canaria isn't just a Las palmas thing. The Maspalomas and Mogán events are big too, and every municipality celebrates its own carnival with parades, live music and street events. Carnival season in Gran Canaria goies from the start of February right through until the start of April. See the dates for the main Las Palmas 2018 carnival season here.

History and dates of the Las Palmas carnival

Las Palmas' carnival tradition started in 1574 with Italian merchants. Apart from a break when misery-guts Franco banned public fun, it's been on ever since.

Carnaval starts on the first of February with the inauguration of the massive stage in Santa Catalina Park. The action centres around the same area with a funfair and lots of pop up bars and snack stands (called chiringuitos). They open every evening and play music at the weekends. If you're in the city in February don't miss the party atmosphere, especially at the group of LGBT stands that everybody calls the chiringays.

The biggest event used to be the carnival queen gala where pretty girls in big dresses competed for the crown.

Nowadays the drag queen gala rules supreme and has become an international event since the first one in 1998. Getting tickets to watch the gala live is almost impossible as they sell out in minutes but it's always on local and national Spanish TV.

If you're really into the whole drag show vibe, it's a great night out. However, plenty of people have said that three straight hours of drag performances is about two hours too many and that they found the experience a little bit dull.

The main Las Palmas carnival parade winds its way through the city with decorated floats (lorries with huge speakers welded to them) competing to see who can play the loudest music. While thousands of locals dress up and watch the start of the parade, the party really gets going after dark.

Each float has a DJ and thousands of kids dance behind them. It's basically a street rave fuelled by reggaeton and rum; great fun if you get stuck in, but not the most attractive event to watch.

The best part for non-ravers is the beginning when it's still light and the various queens and drag queens start the procession.

There's a pet parade that's always worth a watch, a children's parade, and a final night of bedlam with the sardine parade: weeping men dressed as widows follow a giant papier-mache sardine through the city to the beach. Here it gets burned and carnival ends with a big fireworks display.

The widow's parade is on the last day or carnival and is all about men in drag mourning hysterically. Even the sardine has over the top red lips.

There's been a big attempt in recent years to spread the Las Palmas carnival back out into the city and away from Santa Catalina square. Each barrio now has its own party and they are more relaxed than the big nights in the port district.

A large part of the Las Palmas carnival is about competitions between local dance and drumming troupes from the barrios. From a visitors point of view, they are pretty confusing and the early rounds of the competitions last for hours. Watch for a while and then head over to the bars for refreshment.

The key to enjoying carnival in Las Palmas is to join in with one of the main events and also to hang around the squares in the evenings for a more relaxed view of the city at play.

The Beach Event: The Sunshine Parade

We love the Carnaval al Sol parade down the beachfront. All the local dance troupes take part and you get the fun and energy of carnival with the beach in the background.

The traditional carnival in Vegueta and Triana is also excellent. Everybody dresses up in old-fashioned white clothes and wanders around the old town. It's much more sedate than the big events down in Santa Catalina which are dominated by the kids. Just watch out for anybody carrying a white package. It's traditional to throw flour and talcum powder at people, especially if they aren't wearing white. You've been warned.

It's amazing what you can do with an airbrush and a pretty, almost naked body. The Las Palmas body painting competition brings the world's top body painters to the city to show off their skills. The body painting gala is on

Alex Says: If you're staying in Las Palmas during carnival, book a place to sleep a long way from the action. You don't want a view of Santa Catalina square in February.

For more info on Las Palmas, head over to our Las Palmas guide.

We have 4224 guests and no members online