When is the best time to visit Las Palmas 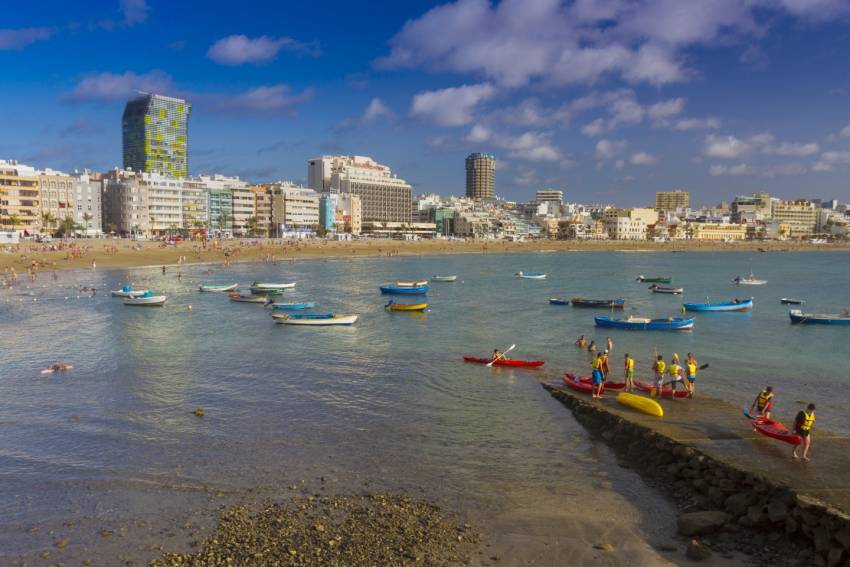 There’s no bad month to visit Las Palmas city as its climate is one of the world’s best, but the weather does have its quirks. Here’s a season-by-season guide to the weather in Gran Canaria’s capital.

Between March and May Las Palmas gets the odd cloudy period and showery day but is mostly clear. Temperatures during the day range from 19ºC up to 30ºC, depending on whether it’s sunny. The sea is around 18-20ºC so jump in if the sun is out.

Spring is an excellent period to visit the city, especially if you plan to explore the island.

Summer in Las Palmas goes from May/June to mid-October. It starts and ends sunny with a grey patch in the middle.

In July and August, the Trade Winds push cloud off the sea and it builds up over the city. It’s called the Panza de Burro (donkey belly) and often means that the city is the only cloudy place in Gran Canaria. If the Panza coincides with hot weather you get high humidity in Las Palmas, referred to as “bochorno” or “calufa”.

The Panza is unpredictable and can last for weeks or not show up at all: It just depends on the conditions in the North Atlantic. Even during Panza periods the city is warm and you get some sunshine most days. The cloud can be a relief as you don’t have to worry about burning as soon as you step outdoors.

September and October are largely sunny and warm in Las Palmas and the sea is warm.

Autumn in Las Palmas runs from mid-October until the end of November. The sea cools down fast after the summer and you may need a layer in the evenings. You’ll get sunshine most days but be prepared for the odd rain shower and cloudy stretch.

The surf is excellent in autumn and walking in north Gran Canaria is pleasant. The island starts to green up as soon as it gets a shower.

During Las Palmas’ winter you see cruise ship passengers and visitors in t-shirts and shorts and locals in woolly hats and even fur coats: Canarians have a different idea of the cold to the rest of Europe and wrap up as soon as the temperature gets close to 20ºC.

For Europeans, the winter in Las Palmas is a non-event. Daytime temperatures are over 20ºC and you get enough sunshine to go to the beach most days. You need layers in the evenings and at night but you can eat outdoors in a light jumper. The city gets the odd storm and when the waves are big they spray over onto the Las Canteras promenade and the sea wall by the port.

Winter is a busy period in the city as it's surf season, the cruise liners move south from the Med for the winter and the beach front is full of snowbirds (long-term visitors hiding from the real winter in northern Europe).

Overall winter is a great time to come to Las Palmas. The walking is great, the bars and restaurants are lively and you can always head south during cloudy patches.

May, September and October are great months to visit Las Palmas. February is liveliest thanks to the carnival.

In May, most days are sunny but the full heat of summer hasn’t started yet. You can still walk on the sand at midday without getting burned toes and it’s warm enough to sit outside in the evenings without an extra layer.

September is Las Palmas’ real summer months: The panza fades away and the sun is hot. It’s when most locals head to Las Canteras beach as they spend July and August on other islands or in the south. The second weekend in September is the busiest as it’s the last weekend before school starts.

In October, you get the blue skies but temperatures are a little lower and the beach isn’t as crowded. An added bonus of October is that the surf starts up again at the south end of the beach after its summer lull.

In February, Las Palmas' carnival is in full flow with everything from pet parades, beachfront dances and a fair in Santa Cataline park. It can be noisy to pick your accommodation with care.

We have 3290 guests and no members online