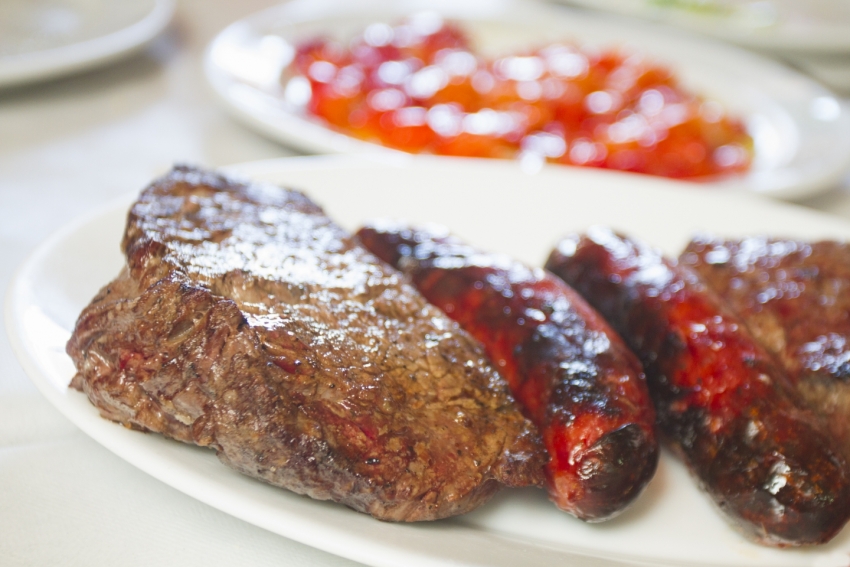 Everybody loves a plate of papas con mojo, but there's more to Gran Canaria food than salty potatoes. From great steak to cactus fruit, here's ten things that have to try before you leave.

Those long yellow things you know aren't proper bananas. They were picked green and spent weeks in a fridge before getting to the shops. Consequently, they never ripen sweet. Canarian bananas on the other hand, and especially the ones sold in little shops and local markets, are picked just as they turn yellow and have all the sweet goodness that the sun can give them.

Choose bananas that have at least a little yellow in the skin and smell of banana. Don't be afraid of little black marks on the skin as they are a sign of ripeness. Ripen your bananas fast by putting them in a paper bag and leaving them in a sunny spot for a day.

Nobody in the Canary Islands eats sandwiches while hunched over a computer. Instead, they go home for lunch, or to a restaurant for a menu del dia set menu. These cost from 6-15 euros and you get a drink, starter, main, and a choice of dessert or coffee. Most places offer you a choice of at least two starters and main courses.

Daily menus are fantastic value and a great way to eat like a local. Resort restaurants don't offer them but look out for local places catering to workers (normally around the corner from where locals work).

Known as tunos, cactus fruit grow wild all over Gran Canaria and come in a variety of shapes and colours. The small, bright red ones are called "tuno indio" and are used to make smoothies, jam and liqueur. Larger green, yellow, orange or red ones are best eaten peeled and cold from the fridge.

Peeling a tuno without getting spines everywhere is an art form and it's much better to but de-spined or peeled ones in a shop than to pick your own (seriously, the spines get everywhere). Give shop bought tunos a good wash before peeling, just in case there are a few spines left.

Flan in Gran Canaria is egg custard. It's served with a caramel topping and whipped cream and is a local restaurant staple. Normally rich, dense and flavoured with lemon peel, quality flan is making a comeback after years of restaurants buying in inferior puddings.

Alex says: Always ask "El flan de la casa?" and watch the waiter for any hesitation that shows that the chef unwrapped it rather than made it.

A dessert that came from nowhere and conquered the Gran Canaria restaurant scene. It's so popular that some restaurants have given up selling other puddings.

Polvitos is like a light cheesecake made with a crumbled biscuit base, a filling of whipped cream flavoured with dulce de leche, and a topping of crushed meringue. Rich but light at the same time, and a perfect dessert on a hot day.

Polvitos Uruguayos was invented at the Novillo Precoz restaurant on Calle Portugal in Las Palmas. As well as the famous dessert, it does some of the best steaks this side of Buenos Aires (see below).

Steak in Gran Canaria ranges from good to extraordinary, depending on where you order it. The best steak restaurants serve grass-fed beef imported fresh from Spain, Uruguay and Argentina while the cheaper grills sell frozen Brazillian meat. Most of it is better quality than you get in Europe although the cheaper stuff isn't aged for long and can be chewy.

Pick a restaurant with a reputation for steak (not a seafood place) and ask where the meat comes from. Just because a restaurant has a cow on its sign doesn't mean that it serves good steak.

In south Gran Canaria, El Churrasco on the Meloneras Boulevard does great steak: The owner has his own Aberdeen Angus farm in Argentina. In Las Palmas, El Churrasco is on Olof Palme street and the Novillo Precoz (famous for superb steak) is on Calle Portugal just behind the beach.

Little squids flash grilled and served with delicious, herby green mojo sauce: Not as famous as calamares but a mouthful of flavour that all seafood lovers have to try in Gran Canaria. Most local seafood restaurants serve them, although they don't come up on resort menus.

Alex says: The best place to try them is the scruffy Bar La Peña where Olof Palme street meets the beach in Las Palmas.

Grilled with sweet tomato chutney or cut straight from the wheel, Gran Canaria goat (and sheep) cheese is spectacular and comes in a wide range of tastes and styles. Soft queso tierno is fantastic drizzled with honey for breakfast, smoked cheese from Valsequillo is perfect for grilling, and the hard version is a perfect (and much cheaper) substitute for parmesan cheese on pasta and in pestos. Cheese labelled as 'flor' is suitable for vegetarians as they are made with thistle sap instead of rennet.

Buy local cheese from markets and small shops but skip the vacuum-packed stuff in supermarkets as it's tasteless.

Lex says: Keep your local cheese out of the fridge as it tastes much better and doesn't dry out.

Crispy on the outside, rich and soft on the outside, the salt balancing out the dark sweetness of the cane syrup. Berenjenas fritas con miel de palma is the most common vegetarian option on Gran Canaria menus after garlic mushrooms and the ubiquitous papas con mojo (always double check tortilla; it often contains sausage or ham).

This is a great starter or snack for a hot day and well worth ordering even if you think that you don't like aubergine (you do, you just haven't had it done right yet).

Gran Canaria's highlands are covered with wild almond trees and almost all the nuts end up in bienmesabe. This improbably thick paste contains ground almonds, honey, egg and lemon peel. Its origin is Arab (via southern Spain); think of the dense nut and honey pastes in Arab pastries.

Bienmesabe is spectacular dolloped onto vanilla ice cream or used as a cake filling. It's sold in jars all over the island but is traditionally made in Tejeda village.

We have 2091 guests and no members online