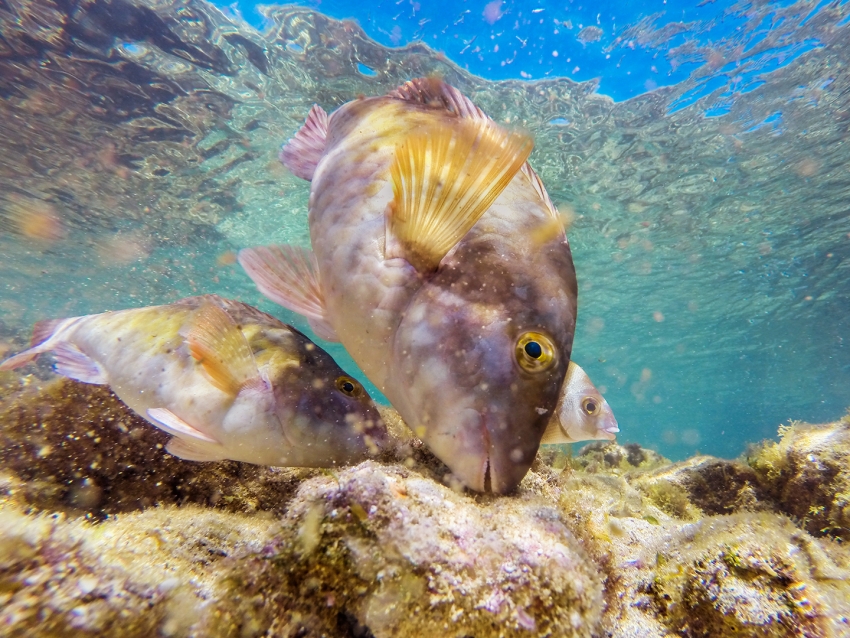 Snorkel in Gran Canaria and you meet fish like this www.photosgrancanaria.com

With warm, clear water and a huge range of African, Atlantic and Mediterranean fish Gran Canaria is a top class snorkeling spot. However, you need to know where to go because the sandy beaches, where most people jump in, aren't the best place to meet the marine life. Here's our guide to the best places to snorkel in Gran Canaria.

While the sea around Gran Canaria is pretty safe please don't go snorkeling off rocky shores if it's rough and remember that it's much easier to get into the water than out of it, especially if there any swell. While the rule isn't enforced it's technically obligatory to tow a dive buoy if you snorkel outside swimming areas in Gran Canaria. Even if you have one stay well clear of boat lanes and harbour entrances.

If it's sunny remember to wear a rash vest or an old t-shirt so that you don't come out of the water with a burned back. 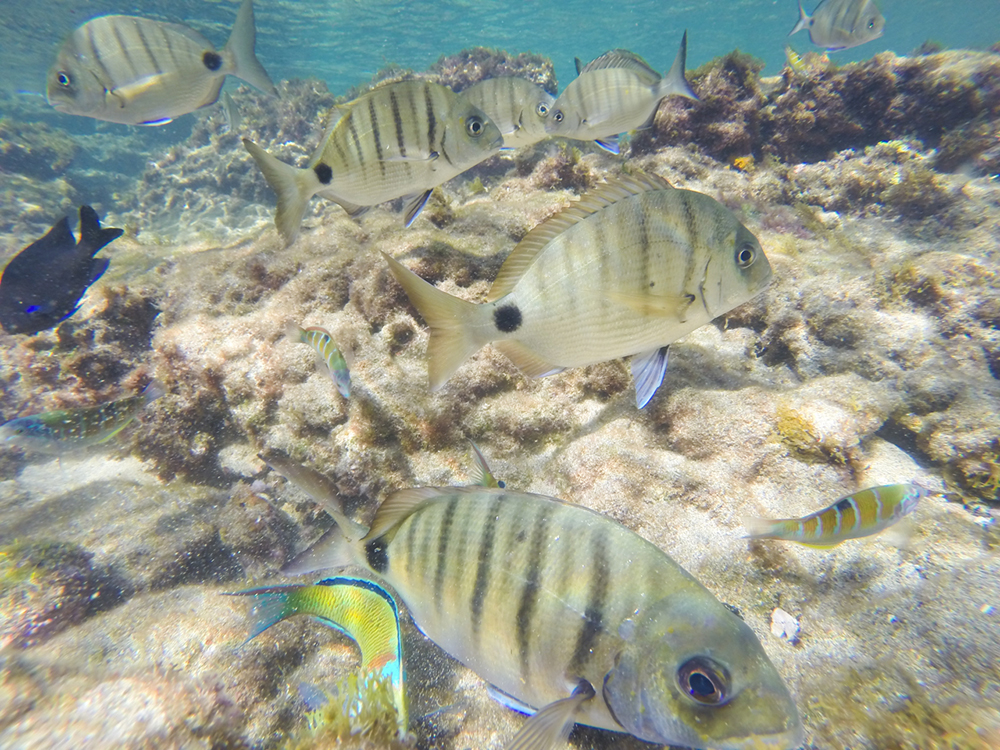 The area behind the reef at Las Canteras beach has been a micro reserve for almost ten years and the marine life is thriving. The best bits are along the reef at low tide and off the rocks just south of Playa Chica. Expect to see big stripey bream, schools of parrotfish, lots of multi-coloured wrasses, combers and blue damsel fish, and the odd barracuda and ray. Cuttlefish and octopus are common and the underwater reefs hide scorpionfish, cardinal fish, moray eels and grouper.

If you see what looks like a sea snake don't panic as there aren't any in the Atlantic Ocean: Instead you've been lucky enough to spot the beach's shiest inhabitant: The harmless and toothless snake eel.

Our Kindle snorkelling guide to Las Canteras is a complete guide to where to go and what you'll see.

Famous as a top dive site in Gran Canaria, Sardina is also a great place for snorkeling. Jump in from the jetty where the divers gather rather than from the sandy beach. Sardina has a huge range of fish but is famous for its angel sharks and big rays. Just occasionally, a whale shark pops round for a visit. 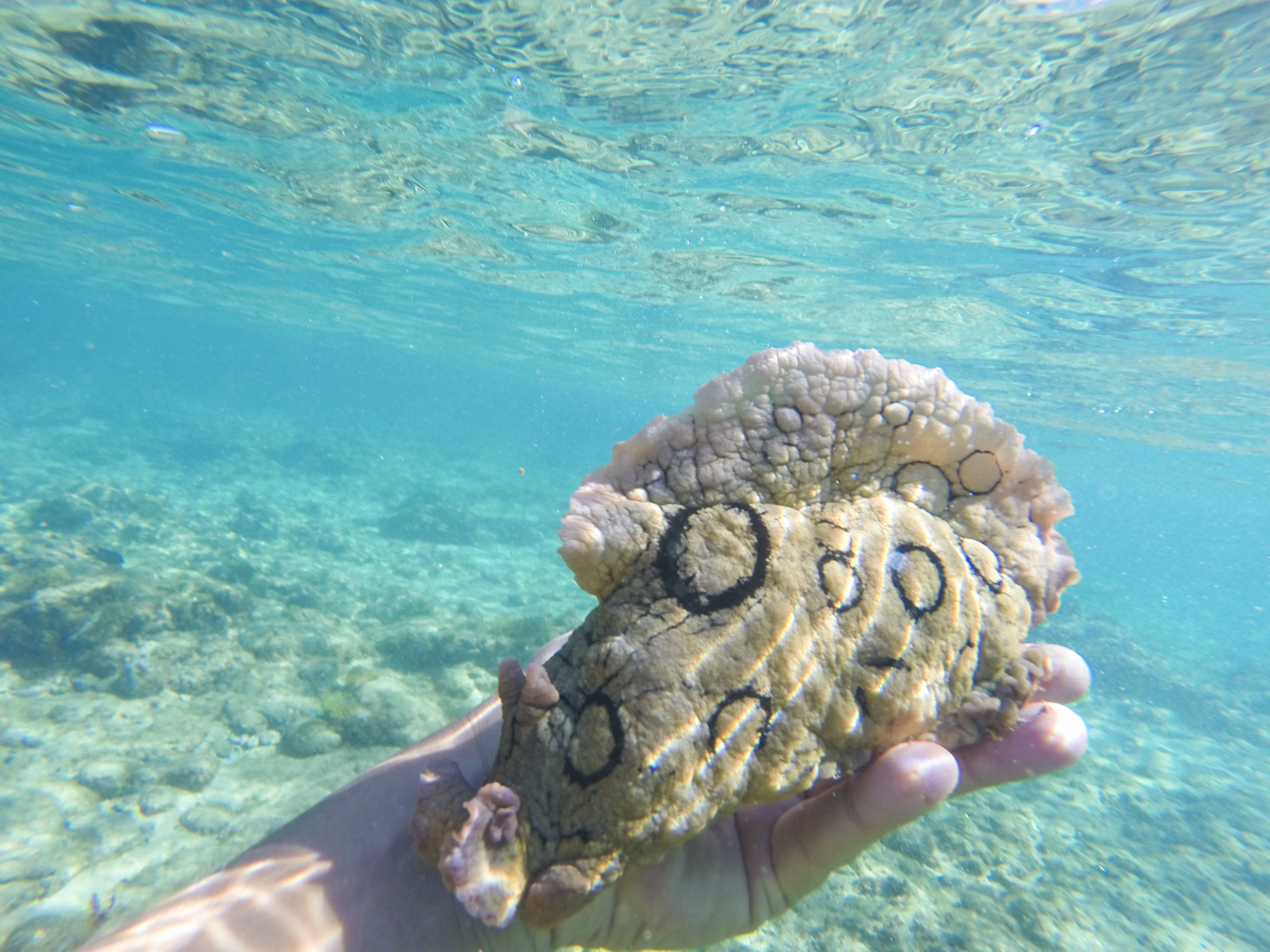 While Amadores doesn't have the big range of fish that you get in wilder spots it is a great place to snorkel. Stick to the rocks at either end of the beach and you'll find clouds of wrasse and damselfish, carpets of anemones, schools of bream and lots of little gobies on the rocks. There's plenty of octopus hiding here as well, but they are hard to spot (hint: they're nosy and always pick a cave with a good view).

Walk to the far end of the beach and jump in off the pebble beach. Then swim along the coast or along the groyne that protects the beach. The water here is as clear as it comes and you'll see plenty of fish. Don't snorkel here if there are waves. 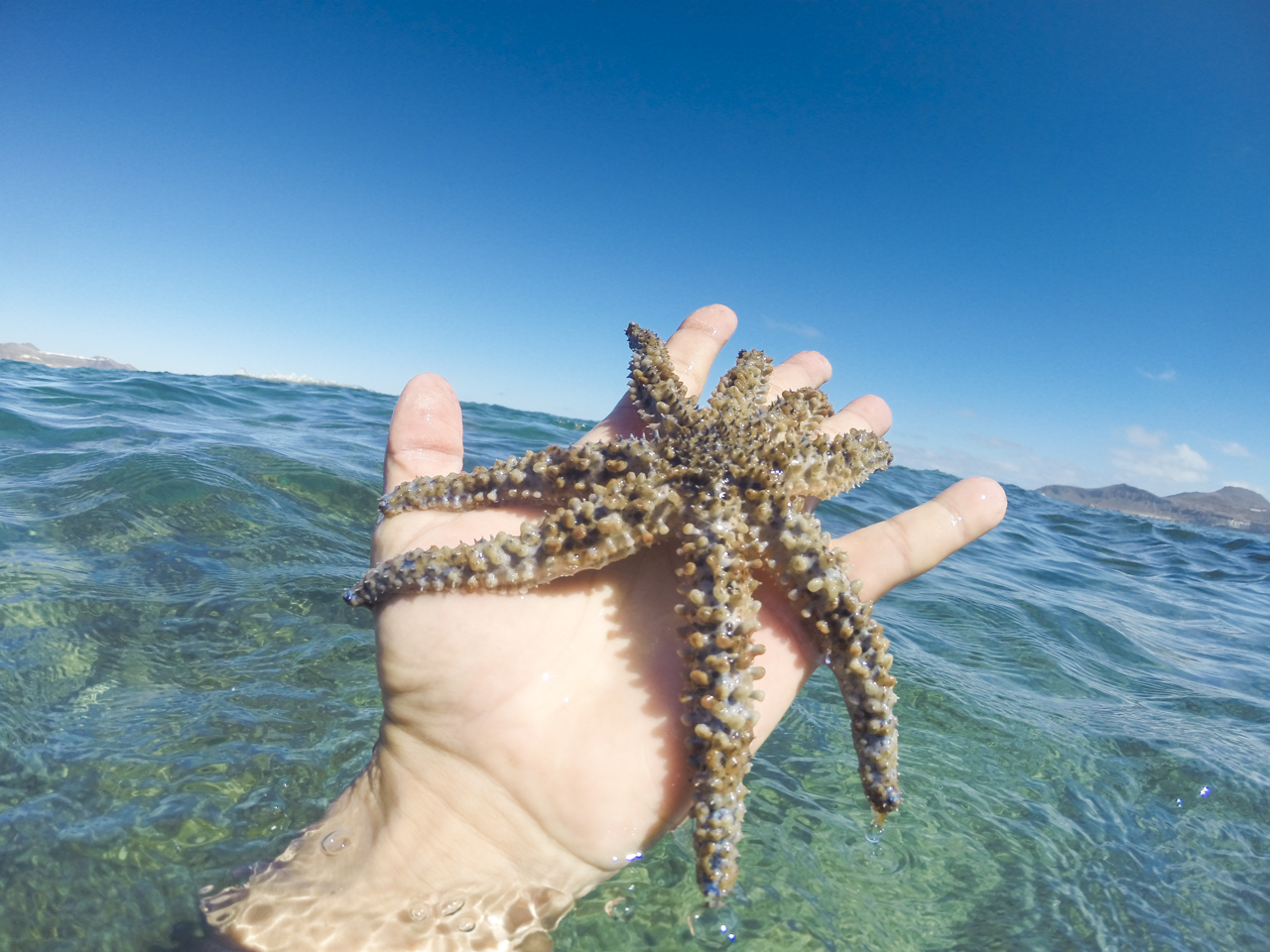 Jump in off the pebble beach in the harbour and stick inside the swimming area. There lots of small breams and colourful wrasse as well as schools of mullet and the odd octopus. For a longer snorkel try the area on the far side of the old jetty. There are big spider crabs hidden amongst the weed, but they're masters of disguise. Advanced snorkelers can even swim over to the famous Finger of God rock (now minus its finger). Just don't swim back into the harbour mouth as this is where the big ferry comes in.

The island's best dive site is perfect for snorkeling as you just jump in off the little beach. The only problem is the access down a track. It's fine if you have a 4WD or a car with high clearance but little hire cars often scrape the rocks. Walk the last bit and you'll be fine.

Pretty much everything that lives around Gran Canaria visits this site so expect to see a huge range of fish from groupers to lizardfish and even big barracuda and rays. 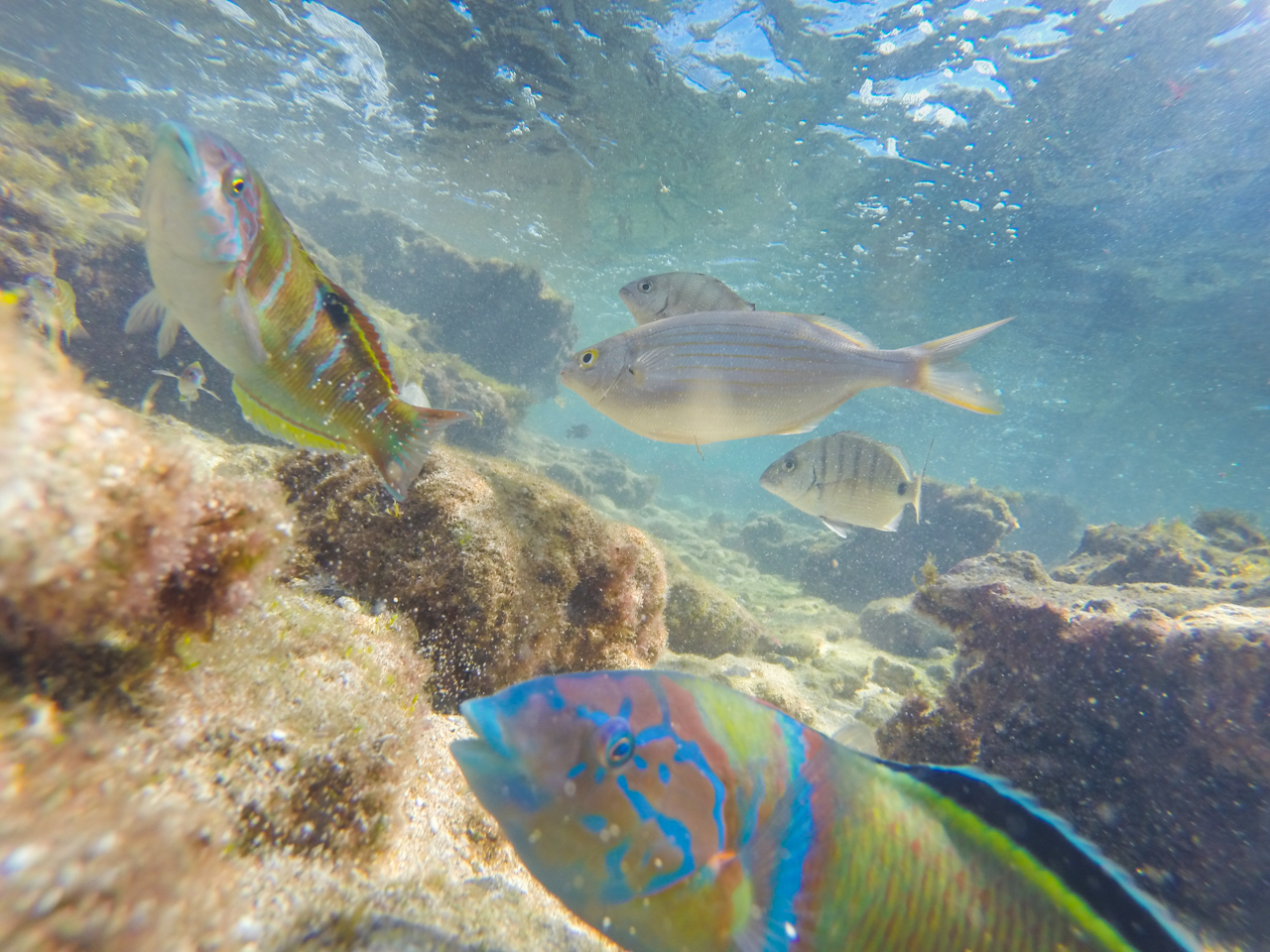 Clear water and reef bottoms mean that most of the south cost of Gran Canaria between Puerto Rico and Puerto Mogán is great for snorkelling. However, it difficult to get to unless you walk down the valleys from the road or take a boat. Lots of the boat trips out of Puerto Rico include a stop for lunch that's perfect for a snorkel.

There-s nothing big in the natural pools at El Puertillo but there's plenty of colourful little fish and shells in the calm water. When the north coast gets hammered by big waves it's about the only spot that's safe for snorkelling. Take a bit of bread with you and the tame mullet will come and say hello. 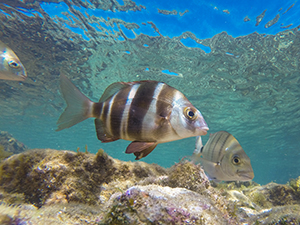 Tiny Tufia on the east coast has been in the news a lot recently as it's been declared illegal and the government says it will have to be demolished. The locals aren't impressed and are fighting to keep their coastal homes. As well as a fighting spirit, Tufia has a tiny beach and a sheltered bay that is excellent for snorkelling. The bottom is lava and there's a huge range of fish hiding in the crags and caves.

The only place, where it's not worth putting on a snorkel, is Maspalomas beach. It's all sand and often a bit cloudy due to the waves. There are seabass and the odd flatfish but with no rocks to attract fish they are hard to find. To find fish in Gran Canaria just head to the nearest rocky bit of coastline and, once you've worked out how to get back out, jump in.

We have 2038 guests and no members online