The Science Behind Gran Canaria's Bubble Of Sunshine 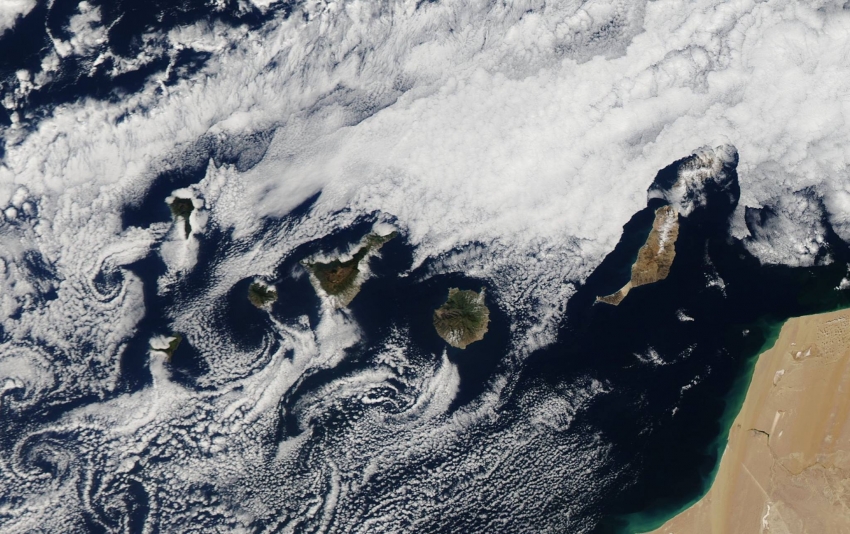 Just 100 kilometres from the African coast, the Canary Islands sit in a remarkably cloud-free bit of the Atlantic Ocean. Most cold weather systems from the North Atlantic don't make it this far south, and most tropical weather from West Africa doesn't come north. It makes the skies over the Canaries about as clear as they come anywhere that isn't a major dessert.

The bubble of sunshine

Even when the Atlantic Ocean is covered by cloud, the southern half of Gran Canaria is almost always sunny. This is because most cloud comes from the north and is pushed towards the Canary islands by the Trade Winds. When the wind and cloud hit Gran Canaria, they go around the island rather than over it. Any cloud that does make it over the island tends to burn off when it meets the hot air rising off the rocky south of Gran Canaria.

This means that there is almost always a clear patch of sky over south Gran Canaria.

The sheltering effect of Gran Canaria's central mountains also protects the south coast from the wind; The area between Arguineguín and Puerto de Mogán is almost always the warmest and calmest bit of the Canary Islands during the winter.

South of the island, you often see repeating swirls in the clouds known as Von Karman vortices. They are caused by Gran Canaria disrupting the flow of the Trade Winds.

But it's cloudy in south Gran Canaria today

Yes, sorry about that. South Gran Canaria gets over 320 days of sunshine per year, but sometimes it is cloudy. Occasionally it even rains.

Cloudy days happen when there is high cloud over the Atlantic that covers the whole island and is too high up to burn off. Or when the wind changes and tropical clouds come up from the south. On rare occasions, we even get dusty cloud blowing over Gran Canaria from the Sahara desert.

Most cloudy episodes only last for a couple of days but we do get the odd cloudy and wet week (maybe one or two per year).

What about the rest of Gran Canaria?

People use the term 'microclimates' to describe the weather in Gran Canaria and the Canary Islands because it varies so much depending on location. For example, Agaete in north-west Gran Canari has the same sunny climate as south Gran Canaria even though the rest of the north coast is much cloudier than the south.

East Gran Canaria tends to be sunny most days, although it is very windy during the summer months; Great for windsurfers and kiteboarders but not so good for sunbathers. In the winter, most east coast beaches are calm and much less crowded than the big ones in the resorts.

West Gran Canaria is also sunny, but there's not much there so people don't notice. The only west coast town, La Aldea, gets plenty of sun but only serious walkers and lovers of remote places stay there.

North Gran Canaria gets more cloud than the rest of the island but is still a sunny place. That said, during the winter months, it can be cloudy for several days at a time because the trade winds pile cloud up against the steep mountains.

Gran Canaria's interior is a mixed bag and it can be sunny, cloudy and raining all at the same time. The tip of the island even gets a dusting of snow every couple of years. If you stay in the highlands or plan to visit them, take a good windproof jacket in the winter and a layer or two at all times.

For more on the Gran Canaria climate, see our weather section. For the forecast for the next few days, go here.

We have 2378 guests and no members online