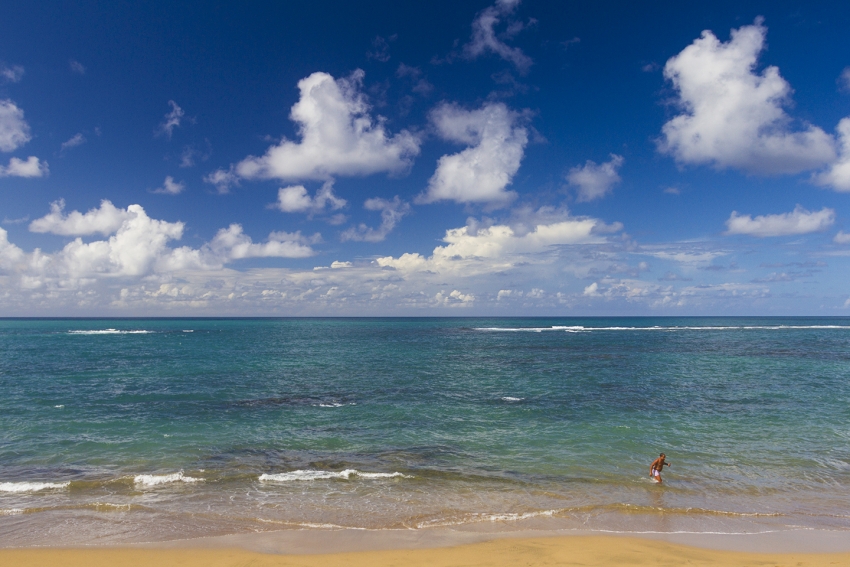 October is our favourite month in Gran Canaria. After a long, hot summer the temperatures start to drop and the sky is blue and full of pretty little clouds. With average day temperatures at 26ºC and the lows at 20ºC, the weather is as close to perfect as it gets.

There are seven hours of sunshine per day on average during October and if you love swimming, then Gran Canaria in October is the place to be: The water temperature is a perfect 23ºC. After the calm summer months, the water is clear and perfect for snorkelling.

North and south Gran Canaria get opposite weather during October. In the south and the resorts, the days start sunny and clouds form slowly throughout the day as hot air rises off the centre of the island. These clouds grow and grow until the sun drops, then they fade away. Occasionally they get big enough for a light afternoon shower.

The Gran Canaria highlands tend to start off sunny and then cloud over due to the buildup of clouds.

In north Gran Canaria, the Trade Winds push cloud from the Atlantic Ocean towards the island and it backs up when it hits the steep northern half of the island. As the sun heats up during the day these clouds burn off leaving sunny afternoons.

With the temperatures cooling but the ocean still warm, Gran Canaria does get the odd October wet patch. For example, we had storms in mid-October 2015 with torrential rain in the north and east of the island.

These wet periods tend to be intermittent with sunshine in between the showers. Temperatures are still hot during the day and over 20ºC at night.

October is the start of walking season in Gran Canaria so if you plan to hike, bring a layer and a waterproof as it can be cool and wet in the hills. If you plan to stick to the beaches, then October is shorts and t-shirt weather during the day and warm enough for just the lightest layer at night. Bring sunscreen whatever you plan to do and don't bother with an umbrella. If you need one, just buy a cheapie.

The weather in Gran Canaria during October is as good as it gets. While the rest of Europe is cooling down fast, we still get sunshine, warmth and warm waters.

We have 3446 guests and no members online