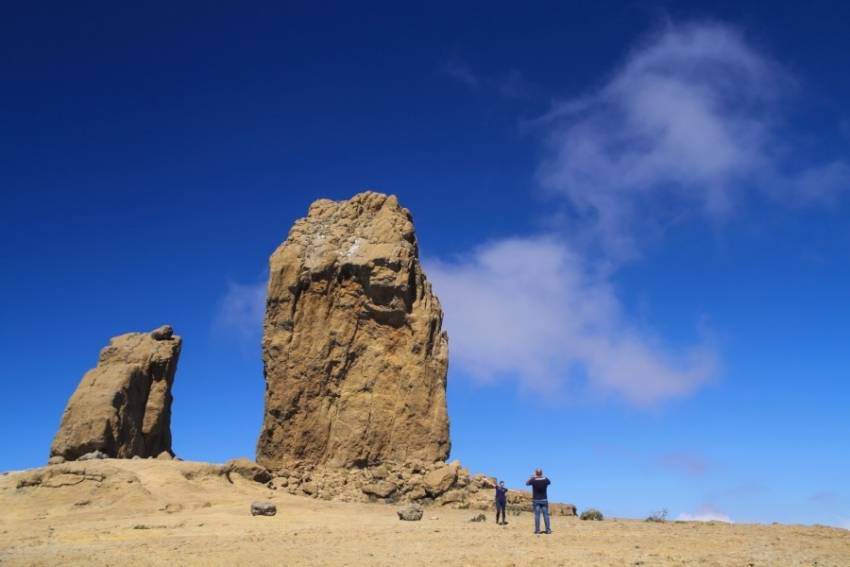 Roque Nublo guards the centre of Gran Canaria but is surprisingly approachable for an icon: you can walk right up to it and just sit down. With a few ropes and a lot of courage, you can even climb it.

The name, which translates as Cloud Rock, comes from Roque Nublo's habit of disappearing into the clouds and mist that often envelop the top of Gran Canaria. If you visit on a cloudy day it's always worth waiting for a while as the rock often pops out of the clouds for a few seconds.

Visiting Roque Nublo is never the same twice. Some days you're surrounded by icy mist all the way up and can't see the rock until you can touch it. Others there isn't a cloud in the sky and the walk up is baking hot. Some days you get a bit of both: take a layer, even in summer. Look or listen out for the ravens as a couple of the island's last few pairs hang out on the cliffs by Roque Nublo.

You don't realise just how big the rock is until you get within touching distance. Or how precarious it is: Roque Nublo is right on the edge and you need climbing gear to walk around it.

At 80 metres tall, Roque Nublo is one of the biggest free-standing rocks in the world. It's 1813 metres above sea level and not, as many visitors believe, the highest point on the island: Pico de las Nieves just to the east is higher at 1956 metres. No matter, the view west from Cloud Rock is just as spectacular as the one from the high point.

The massive eruption that created this part of Gran Canaria was about 4.5 million ago.  Erosion has since worn down the dome of lava that it left on top of the island, leaving Roque Nublo along with the other famous Gran Canaria monoliths like Roque Bentayga and Roque Palmes. Roque Nublo may even be the remnants of the main volcanic pipe from these ancient eruptions: the spot where the magma poured out and the Cumbres as we know them were born.

Roque Nublo is easy to get to. From the La Goleta car park (with a snack van) on the GC 60 road between San Bartolome de Tirajana (Tunte) and Tejeda, you walk over the road and up the track. It's an short if steep climb that takes about 15 minutes. Once you reach the rock platform you get a panoramic view of Gran Canaria's rugged centre.

At the base of the rock walk left and you get to a little platform where you can sit and look out over west Gran Canaria and Teide volcano. The town in the far distance is La Aldea and the white patches are tomato greenhouses. In front of you is a tiny flat rock that's great for photos but too much for anyone with vertigo.

To the north, you see the village of Artenara perched on the edge of the Caldera de Tejeda wall. Some days the clouds pour over the edge here before fading away in the heat.

To the south, you see the island's huge reservoirs and all way to the south coast.

Look east and you see the island's high point marked by the giant globes of the observatory.

Roque Nublo is on several of the main walking routes in the centre of Gran Canaria. You can walk up from Tejeda village or across the top from San Bartolome or Cruz de Tejeda. The routes are well signposted but remember to carry plenty of water as there's not many shops on route.

We have 4055 guests and no members online