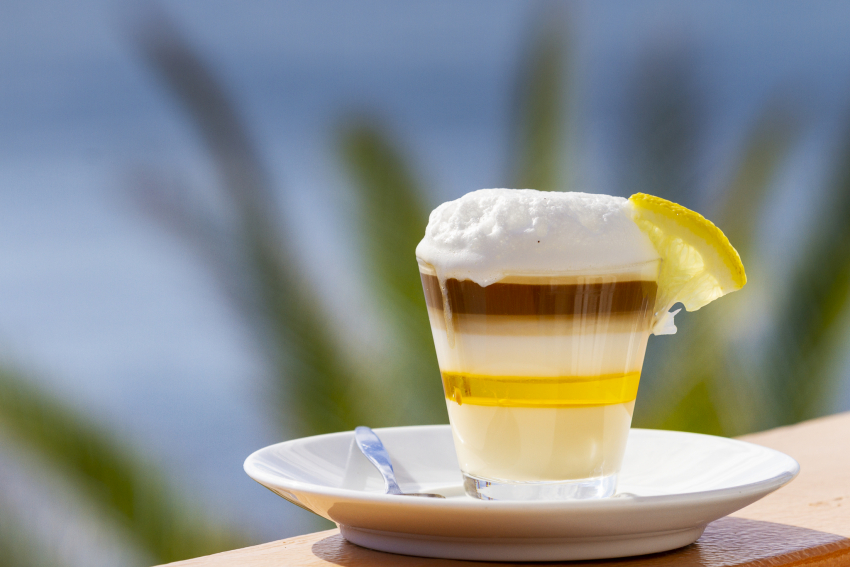 The delicious Barraquito coffee was invented in Santa Cruz de Tenerife at some point in the early 20th Century but like all good legends, its exact origins are nebulous.

Some say a man nicknamed Barraco breakfasted in the bar Imperial and always asked for a carajillo (espresso with booze in it) with a difference. Followers of this origin story spell the name with a capital B. Others are convinced that a waiter at the nearby Los Paragüitas bar invented the Barraquito on a slow day. The recipe is also attributed to a Mr Manolo Grijalbo who created it for his bohemian clients at a long forgotten bar over the road from the Santa Cruz casino.

Meanwhile, some in north Tenerife add extra Licor 43, call the barraquito a zaperoco, and insist that it originated in Puerto de La Cruz and has been hijacked by the capital city. The response from Santa Cruz is always, "pfff, they just say that for the tourists".

The one thing that everyone in Tenerife agrees on is that the Barraquito is completely different from the cafe Asiático from Cartagena in southern Spain. The Asiático is made from exactly the same ingredients in exactly the same way but is, of course, a completely different drink. The fact that Licor 43 is made in Cartagena is neither here nor there: There is no firm evidence about which of the two appeared first as both seem to date to the 1930s or 1940s.

Anyway, enough of this historical nonsense.

How to make a Barraquito coffee

The Barraquito is made from five ingredients layered up like a 1980s cocktail.

It is served in a glass, like a standard Canary Islands cortado or cortado largo. These days it also comes in a wide array of rather silly vessels ranging from mini beer steins to champagne flutes.

Be as camp as you like with the glass, but stick to the original recipe to get the right flavour at the end:

The bottom layer is a shot of condensed milk.

The second a half shot layer of Licor 43, a sweet Spanish liqueur.

The third a shot of piping hot espresso coffee.

The fourth a shot of hot milk.

Top up with milk foam to create the fifth layer.

Dust the top with cinnamon and add a strip of zest from an unwaxed lemon.

The idea is that you mix all the layers together and drink your Barraquito like a normal coffee.

In our seminal guide about How to order coffee like a local in Gran Canaria we don't even mention the Barraquito because, somewhat inexplicably, it wasn't a thing here until recently. Lovers of sweet, layered coffee in Gran Canaria had to make do with the leche y leche, a measly two-layered effort made with condensed milk and milky coffee served with extra sugar on the side rather than cinnamon and lemon peel.

However, the Barraquito is now here to stay on menus at touristy bars and cafes all across the island. Even the locals are indulging along the Las Canteras beachfront in Las Palmas. It is the banana split of the 2020s and makes people ooh and aah and dream of Instagram fame.

The good thing about the Barraquito is that it is delicious as well as Grammable. The unlikely sounding combination of ingredients combine well and you get a lovely hit of rice-puddingy coffee sweetness.

Just remember to drink it hot as it gets a bit gloopy if you spend too long photographing it.

When you take your first sip don't forget to thank Barraco, or Mr Grijalbo, or that anonymousTenerife waiter,  for coming up with the original recipe.

We have 2655 guests and no members online