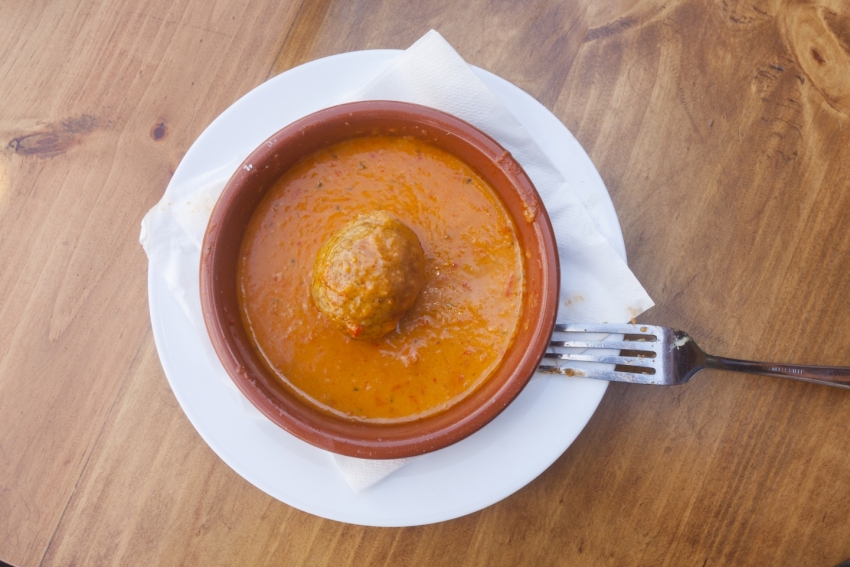 Mojo is the big star of Canary Islands cuisine and the dish that visitors always rave about. But where is it from originally? Our research shows that mojo is a tasty sauce with a fascinating history that spans three continents and thousands of years.

What's in a name

Mojo gets its name from 'Molho', the Portuguese word for sauce. Why? Because many of the original settlers in the Canary Islands were from the Portuguese island of Madeira just north of the Canaries. They came south along with sugar cane and, although later absorbed into the Spanish settler population, left traces of their influence in the language, cuisine and architecture of the Canary Islands.

What exactly is mojo

Canarian mojo sauce or dip is made with a base of olive oil, vinegar, sea salt and garlic. Red mojo is flavoured and coloured with pimentón (paprika), chili and cumin while green mojo uses coriander or parsley and green peppers. Mojo is packed with flavour but isn't very spicy unless you get mojo picón; a version of red mojo made with local bird's eye chillies known as 'pimientos de la puta madre'.

Lex says: One of the great things about mojo is that there are as many recipes as there are cooks and none of them taste as good as your gran's version.

Variations of mojo sauce are common in Cuba, Puerto Rico and other Spanish-Caribbean islands. Mojo is also believed to have influenced the sauces, marinades and barbeque of Deep South cuisine in the USA.

Mojo sauce is a delicious consequence of the Canary Islands' role as a bridge between Europe, Africa and the Americas. It was probably invented in the Canary Islands because this was the first place where all the ingredients came together; chili peppers from South America, pimentón and olive oil from Spain, cumin from North Africa. And let say that the long-lost Guanche cuisine, which developed over 1,500 years before the Spanish arrived in the Canaries, had its influence as well.

The history of green mojo

Green mojo is clearly a variant of Mediterranean green sauce or salsa verde (made with herbs, oil, vinegar and garlic)  common from Portugal to Italy. The original recipe is thought to have come to Europe from the Near East with Roman legionaries.

Each country uses a different mix of herbs for their own green sauce; In Portugal, parsley is the main green element; In Italy parsley and capers are combined with onion and anchovies; In France, sauce vert contains tarragon and even sage and parsley. The Germans go wild with Grüne Soße, which contains Northern European green herbs like borage, sorrel, garden cress, chervil, chives, parsley, and salad burnet.

In the Canary Islands, coriander (cilantro) is the main green ingredient, although some people add parsley and even green pepper (although this makes grannies spin in their graves).

The history of red mojo

Red mojo seems to have it's origins in North African or Spanish cuisine (itself heavily influenced by 800 years of Moorish occupation). It may well back to pre-Hispanic times as we know that the island's original Guanche inhabitants were Berbers from North Africa.

Pimentón is also a common flavouring in Spanish food and is used to flavour and spice sobrasada sausages and paste.

What about the potatoes?

Red mojo is served on papas arrugadas; little potatoes boiled in sea water until their skin wrinkles up and a fine crust of salt appears. The best potatoes to use are tiny little ones with purple skin and yellow flesh that are called papas negras. They were amongst the first potatoes brought to Europe from America and have disappeared everywhere except the Canaries.

Alex says: If you ever find a menu that translates papas arrugadas as 'wrinkly popes', please steal it for us. It's a mythical mistranslation but we've never seen it.

So that's the history of Canarian mojo sauce.  Like all good things, it came out of a blend of cultures and cuisines and found its own home where they all met. To make it, follow our red and green recipes.

We have 3269 guests and no members online