What On Earth Is Going On At Tauro Beach 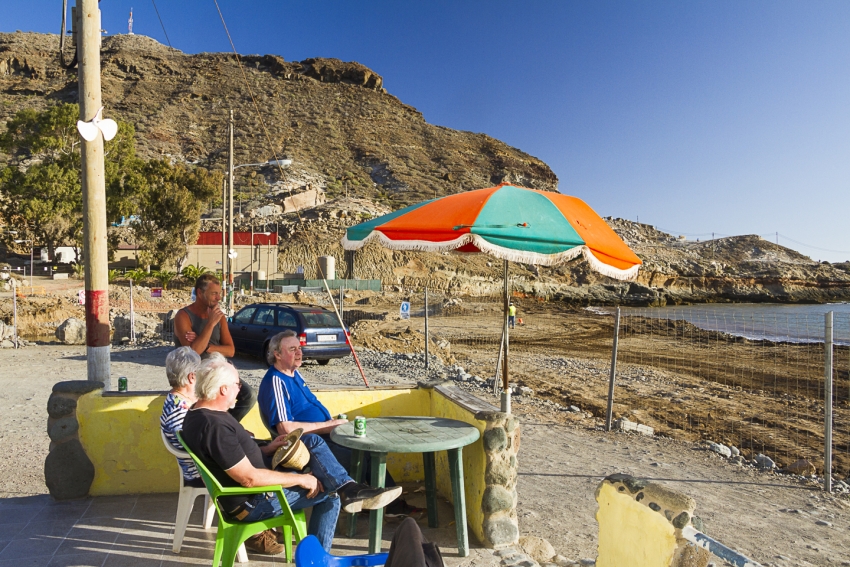 Life goes on at Tauro while the beach is created www.photosgrancanaria.com

Tauro beach either died or was reborn this week, depending on how you feel about things.

Months of clanking and dust

It takes a lot of effort and millions of euros to make a new beach. Well, in Tauro's case to demolish an existing pebble beach and replace it with 300 metres of golden desert sand. First, you have to scoop away all the natural pebbles, then spend months packing down layers of earth and stones with bulldozers. And that's just for the foundations.

The stoic regulars at the Vistamar restaurant, drinking cold pints of Tropical and munching the legendary garlic prawns, have watched the dozers grinding away and all wondered the same thing...

"When does the sand arrive?"

And yesterday, there it was.

The first few thousand tonnes of sand are now on the island and Anfi Tauro, the developer behind the beach project, wasted no time getting the first lorry load onto the beach.

The sand's journey is a saga in its own right. Anfi Tauro couldn't use local sand due to environmental concerns so it had to come from El Aaiun in Morocco by ship.

But Arguineguín harbour is too shallow, and the owners of the cement factory wouldn't let it be unloaded at their docks (local business rivalries at play). In the end, the first 4500 tonnes of sand came ashore at east coast Arinaga.

Eventually, 50,000 tonnes will be unloaded and transported by lorry to Tauro.

200 lorry trips down the motorway later and Tauro beach will have a coating of sand a metre thick.

But for how long?

Won't the sea just wash it away?

This is the question that Tauro regulars and locals have all been asking. South-facing Tauro gets big waves during the winter and lots of people think that the first big swell will wash most of it away.

Anfi Tauro must know better,  or maybe it's in such a hurry to get the Tauro project moving that it doesn't care. With the beach in place, it's betting that the permits for phase two of the Tauro development plan will appear quickly.

A sad day for some

Ramshackle Tauro, with it's run down restaurants, live weekend music and natural pebble beach, has long been south Gran Canaria's anti-tourism spot for decades. But it's been on borrowed time for over twenty years since the Tauro development plan was first announced.

Once the bulldozers moved in, Tauro as many knew and loved it was doomed.

And yet, because phase two isn't official yet, old Tauro lives on. The Vistamar is open and there's work ongoing at the Pio Pio next door. Old Tauro can't last forever, but its last few years will be spent by the beach.

The next phase of Tauro development

There are 7,500 tourist beds in the Tauro development plan, but only 2000 have been built so far. The next phase includes a marina, several hotels and other accommodation complexes, a huge park and shopping area just behind the beach, and all the support facilities like parking places, etc. Anfi Tauro plans to spend over 50 million euros.

What happens after Tauro

With the moratorium on new hotels about to be lifted, new Tauro is just the first in a series of new development along the south coast of Gran Canaria.

There are already hotels approved just west of Pasito Blanco and more will follow.

For better or worse, this phase of development in Gran Canaria won't stop until the cement factory is a gleaming resort.

More in this category: « What On Earth Is Going On At The Yumbo? Soon, All Plane Tickets Between Canary Islands Could Cost Just 30 Euros (Less For Residents) »
Login to post comments
back to top

We have 2922 guests and no members online